Bwonsamdi (pronounced "BWAN-sam-dee")[3] is a powerful loa that controls the spirits of the dead, primarily of trolls. Bwonsamdi's temple is the Necropolis, located in Nazmir on Zandalar. He brings the spirits of any who worship him into his realm, the Other Side.[4] Bwonsamdi grows more powerful the more souls are in his care.[5]

His face is described as looking like a rush'kah mask.[6] After someone undergoes the rite of binding, a ritual "as old as the world itself", the soul of anything they kill goes to Bwonsamdi.[7] To honor the loa of death, Zandalari will don masks in their rituals and pray to him. Bwonsamdi in turn will either answer in kind, or curse them with pain, depending on his mood.[4] 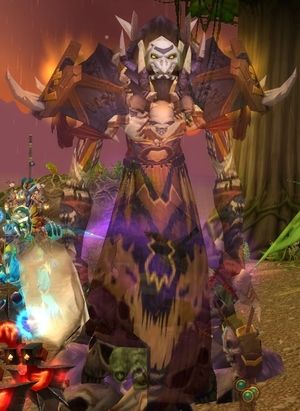 When discussing with Vol'jin, Bwonsamdi stated that the loa came before the trolls, which would make him and other loa older than them.[8] 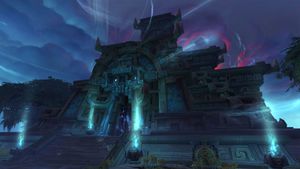 The Necropolis, Bwonsamdi's temple in Nazmir.

Before they were driven away from the Echo Isles by Zalazane and his hexed trolls, the Darkspear tribe once worshiped the great spirit. During the liberation of the Echo Isles, Vol'jin tried to recruit Bwonsamdi to his side for the battle against Zalazane. After Vol'jin and his fellow Horde warriors proved themselves worthy, Bwonsamdi agreed to help them against Zalazane. When Zalazane shielded himself with a protective barrier, an amused Bwonsamdi pointed out that the Darkspear dead belonged in his domain and that Zalazane was going to be one of them. Bwonsamdi then raised Restless Zombies to shatter the barrier and killed Zalazane. With the battle over, Bwonsamdi took his leave.

After Garrosh Hellscream's assassins crippled Vol'jin, the troll found that his shadow hunter powers were being withheld by the loa. In his dreams, Bwonsamdi contacted Vol'jin and told him that his injuries, self doubt, and conflicting loyalty toward the Horde has made the loa forsake him. Bwonsamdi showed him various visions, including a future of Vol'jin using the Horde to destroy the Alliance, and turning the Horde into an empire that would rival even the ancient troll civilizations. The Death Loa wished Vol'jin would use his influence to create as much strife and war as possible, for that would mean more souls would be sent to the other side on his behalf. Vol'jin refused to go down the path of the Zandalari conquerors, believing it was not the Darkspear 'way'. Vol'jin eventually proved his conviction and reaffirmed his identity, regaining both Bwonsamdi's respect and his powers.

Bwonsamdi received the souls Vol'jin sent from the battles between the Shado-Pan and the Thunder King's forces with great satisfaction. At the end of the war, Vol'jin's companion Tyrathan Khort was near death. Vol'jin pleaded with Bwonsamdi to spare Tyrathan. The loa complied, knowing he would have his soul now or later, it did not matter. 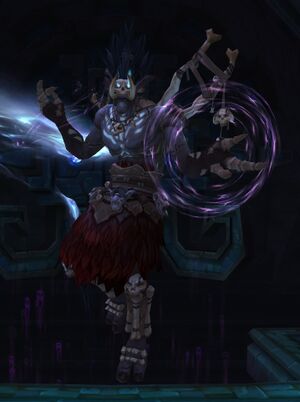 Bwonsamdi in Battle for Azeroth.

When King Rastakhan was betrayed by Zul and near death, Bwonsamdi claimed his soul and at first refused to give it back because the loa of kings Rezan had been keeping Rastakhan from him for a long, long time and he would be denied no further. Rezan threatened Bwonsamdi into complying, but Bwonsamdi was sure that he would see him again soon enough.[9] When Rezan was slain by Zul, his power could no longer keep Bwonsamdi at bay and Rastakhan began to age quickly.[10]

In Nazmir, the Zandalari forces led by Princess Talanji sought the aid of the local loa to battle the blood trolls. Bwonsamdi's worshiper Hanzabu brought a Horde adventurer to the Necropolis to meet with him. After tasking the adventurer with cleansing his temple of the spirits who had abandoned Bwonsamdi for G'huun, Bwonsamdi agreed to pledge his powers to the fight against the blood trolls in exchange for one million souls. The ritual to finalize their contract was interrupted by Grand Ma'da Ateena, leader of the blood trolls, but she was successfully fought off. For being attacked in his own temple, Bwonsamdi declared that the blood trolls would be mighty sorry.[11]

When it was discovered that the turtle loa Torga had been slain by the blood trolls, Talanji and the tortollans called on Bwonsamdi to communicate with Torga's spirit. Bwonsamdi would only comply with a deal, the soul of another loa in exchange for communing with Torga, but Talanji denied him that much to Bwonsamdi's amusement.[12] Instead, the souls of the blood trolls that had eaten Torga's flesh were used in exchange for communing with Torga.[13]

Bwonsamdi participated in the final charge against the blood trolls led by Talanji. He prevented the adventurer from dying to a swarm of blood trolls because they still had a debt to pay him.[14]

After a blood troll attack on Zuldazar, Rastakhan made a deal with Bwonsamdi: If Bwonsamdi gave him the power to take back his empire, then Rastakhan would elevate Bwonsamdi above all other loa in the Zandalari pantheon. Bwonsamdi accepted the deal on one condition: that the king's bloodline would be devoted to Bwonsamdi, to serve him in life and in death. Later, as Dazar'alor came under attack from Zul and Mythrax, Bwonsamdi empowered Rastakhan to kill Zul. He happily congratulated Rastakhan on taking back their empire.[15]

[Urn of Vol'jin] is delivered to Atal'Dazar Bwonsamdi appears saying to bring the urn to his necropolis instead, as he hasn't seen Vol'jin in quite some time and they need to have a face to face talk. There Bwonsamdi discovers that Vol'jin spirit isn't in the urn and says "Da boss ain't gonna like dis".[16]

Seeking to learn where Vol'jin's spirit had gone missing, Bwonsamdi tasked the adventurer and Talanji with performing a seance with the aid of some of Vol'jin's friends from life, Gadrin and Rokhan.[17] They succeeded in contacting him deep within the Shadowlands, and he tasked them with slaying G'huun as justice for the sons and daughters of the loa and the heart of Zandalar. However, he did not answer what it was that had stolen his spirit.[18] 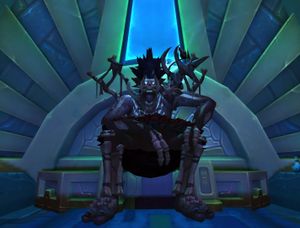 Following the deaths of the Horde's Champion of the Light and Jadefire Masters during the Battle of Dazar'alor, King Rastakhan urged Bwonsamdi to aid his forces. Bwonsamdi created a blood moon and raised the dead to fend off the Alliance. Bwonsamdi also raised Grong into a Revenant and turned him against the Alliance after Horde adventurers slew the giant gorilla. When the Alliance reached King Rastakhan, Bwonsamdi fought at his side and empowered the Zandalari king, but Rastakhan was still ultimately killed. As Talanji held her dying father, Rastakhan's pact with Bwonsamdi was transferred to his daughter as he took his final breath. Bwonsamdi himself then appeared before Talanji, who demanded to know what he had done to her, unaware of the pact her father made that bound his bloodline to the loa of graves. In response, Bwonsamdi merely revealed that her father never told her about their bargain. When asked by her allies about what to do about the fleeing Alliance, she turned towards Bwonsamdi, who with his gesture encouraged Talanji to order the Horde to go after the Alliance.

Vol'jin's spirit, Talanji, and Baine Bloodhoof returned to the Necropolis to reveal that Vol'jin had been calling for him, and Bwonsamdi had not heard him for some reason. They confronted Bwonsamdi to ask him if he was the one who had told the shadow hunter to make Sylvanas the Warchief of the Horde on Vol'jin's deathbed, which Bwonsamdi denied. Even as much as Bwonsamdi was all for war and death, Sylvanas took things too far, and besides that Sylvanas kept the souls of what she killed as undead instead of releasing them for Bwonsamdi to claim. Troubled by their words, Bwonsamdi agreed to help them find out who had really told Vol'jin to put Sylvanas in charge.[19]

Bwonsamdi opened a Death Gate to one of his rivals in the ownership of souls: the Lich King. Like Bwonsamdi, the Lich King told Vol'jin that he was not responsible and that Sylvanas was upsetting the balance of life and death.[20] Realizing that Vol'jin's spirit was getting help from some other power, Bwonsamdi also sent them to speak to the Val'kyr Eyir, warning them not to mention him by name to her. Indeed, because of some past history with Bwonsamdi Eyir did not allow Talanji to enter her hall as she was a priestess of the death loa. Eyir informed the group that Vol'jin had been "touched by the hand of valor", and whoever that was was not the same person who had told Vol'jin to make Sylvanas Warchief.[21][22] Back at the Necropolis, Bwonsamdi mused that while Eyir and the Lich King were not his only rivals they were the ones he thought most likely to be behind it. He urged Vol'jin to search not the living world but the Shadowlands for his answers.[23]

In accordance of the ritual of queens and kings, Talanji sought the judgment of the loa.[24] After passing the trials of Krag'wa, Gonk, and Pa'ku, all that remained was Bwonsamdi. The loa of graves offered Talanji a chance to be freed of the pact by giving him the head of Sylvanas Windrunner. Surprised and stunned by this offer, Talanji, moved by her personal sense of honor, rejected betraying the Horde in such a manner and decided to remain beholden to her father's bargain with Bwonsamdi. The death loa merely remarked that it was a shame as he had been desiring a Warchief's soul for some time. Nonetheless, he gave her his blessing.[25] Having passed the trials, Talanji was declared the Queen of Zandalari.[26]

Bwonsamdi's exact role in the Shadowlands will be defined.[27] The Other Side, his pocket dimension, will appear as a dungeon. 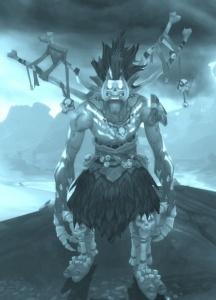 Bwonsamdi guards our spirits well,
He makes death most inviting.
Ya think he be a trickster,
His humor often biting.


Behind his smile and pointed humor,
Dere lies a darkness, a hint of rumor.
He knows things dat make de brave men shriek,
The truth from him, ya must not seek.


De realm of death be his alone.
Ya life and spirit to him be known.
And when dat life do end,
Make sure Bwonsamdi be ya friend.


Den Bwonsamdi will surely guide,
"Come on through to de other side."[28]

In the Hearthstone expansion Rastakhan's Rumble, Bwonsamdi serves as the patron of Bwonsamdi's Zombies, an unsettling, death-obsessed team of troll priests, and personally appears as a legendary priest card. His flavor text reads: "Everyone's dying to meet him."