By Demons Be Driven (WC3 Orc)

By Demons Be Driven is the final chapter of the Invasion of Kalimdor campaign. This is the final mission in the orc campaign. It also marks the first time in which the orcs and the humans sided with each other against a common foe.

Three days later, near the edge of the Barrens... 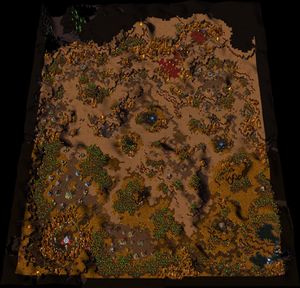 (The area in the northwest is the canyon seen in the closing cinematic and cannot be reached during the mission.)

Hellscream has given himself over to the Legion's control. You must find him and trap his spirit within Jaina's Soul Gem. Bring the Soul Gem to Jaina's Ritual Circle, where a combined effort might save Grom from the Demons' influence.

Cairne Bloodhoof: If the prophet was correct, then the Warsong encampment lies just over the ridge. We should ready ourselves for battle.

Thrall: I know, Cairne. It's just that I never thought I'd live to see the day... when I had to fight my own people.

Jaina Proudmoore: Just remember, Thrall, with this soul gem you can capture your friend Hellscream's spirit without hurting him. But you need to bring it back to my base immediately, so we can free Grom from the demons' control.

Thrall: I... appreciate your help, Miss Proudmoore. Yet another day I thought I'd never live to see.

Jaina Proudmoore: That makes two of us. I'll return to my base and aid you as best I can. Good luck... gentlemen.
Jaina runs back to her base.

Cairne Bloodhoof: The spirits rage around you, young warchief. They sense your anguish... your grief.
Thrall and Cairne begin to run over to the orc base.

Thrall: Hellscream is like a brother to me, Cairne. But he and his clan have fallen under the demons' influence. If I can't save him, then my people might be damned for all time.

Thrall: This is no natural storm! Blessed ancestors... Everyone brace yourselves!

Infernals fall from the sky and start running down the ridge towards the bases!

Thrall: Fight on, my warriors! We must reach Hellscream before it's too late!

Thrall: Grom! You've got come with me!

Grom Hellscream: And where would you lead me, boy? Destiny is at hand! Lord Mannoroth is our master now.

Thrall: Who? You're not talking sense!

Grom Hellscream: Ah, Thrall. You always believed that the demons corrupted our race, but that's only half true. We gave ourselves up willingly on Draenor! The other chieftains and I... we drank Mannoroth's blood, Thrall. We brought this curse upon ourselves!

Thrall: You did this... to our people... knowingly? Arrrgghhh!

Grom Hellscream: You have to do better than that, little brother!

Thrall: Spirits help me! We'll have to go back and try to capture Hellscream again!

At Jaina's base, the priests and shaman use spells to purify the captured Grom of the demons' influence. Eventually, Grom becomes normal again, shrinking back to his normal size and returning to his regular green skin color.

Thrall: To hell with your apologies! Right now, I need you to help me save our people!

Grom Hellscream: Mannoroth... We must face Mannoroth in the canyon.

Thrall: Then let's go. I don't want to keep the bastard waiting.

Thrall, Cairne Bloodhoof, and Jaina Proudmoore met in preparation for their joint assault on the corrupted Warsong Clan. Thrall was very uneasy about all of this, as not only would he be fighting his own people, but he would be working with the humans too. Jaina gave Thrall a magical Soul Gem which would allow him to capture Grom Hellscream without harming him. Once Hellscream was subdued, they would be able to purge him of the demonic corruption. Jaina then left to take charge of her own forces nearby. Thrall confided in Cairne that he feared if Grom couldn't be saved, then the orcish race may be doomed.

The battle soon began as Horde and Alliance soldiers clashed with the Warsong clan. The Warsong orcs did not give ground easily. The demonic corruption had given them enhanced strength and endurance. It had also stripped them of any qualms about killing their own brethren. Nevertheless, while Alliance troops held the Warsong advance, Thrall's forces attacked and pushed their way through, rescuing a number of captive Trolls along the way.

While the battle raged on, the skies suddenly turned red and caught fire. Infernals came crashing down onto the battlefield inflicting heavy damage on the Alliance and Horde forces. The demonic invasion of Kalimdor had begun. Despite this, Thrall fought on determined to reach Hellscream at all cost.

After defeating Hellscream's cadre of Doomguards, Felhounds, and orcish Warlocks, Thrall confronted Grom himself. Thrall pleaded with Grom to surrender and come with him. Grom refused and declared that Mannoroth was the master of the orcs now. Thrall didn't understand what Grom was talking about. Grom then revealed that the Legion had corrupted the orcs because they had been allowed to do so. Back on Draenor Grom and the other Chieftains willingly drank Mannoroth's blood thus knowingly condemning themselves to be slaves of the Burning Legion. Thrall was enraged by this revelation and attacked Hellscream. After a desperate struggle, Thrall managed to regain control of himself and used Jaina's Soul Gem to capture Grom. He then returned to Jaina.

Thrall's shamans and Jaina's priests successfully purged Grom of the demonic influence. Now freed of the demons' control, Grom was ashamed of his recklessness and tried to apologize to Thrall. Thrall, however, was in no mood for apologies. He needed Grom to help him save their people. Grom told him that Mannoroth was waiting for them in a nearby canyon. Thrall replied that they had best go and confront the demon lord, as he didn't want to "keep the bastard waiting."

The Infernals come periodically, along with occasional attacks from Grom. Jaina can defend her own base, you need only worry about yourself. Make sure to always have units on defense incase the infernals attack. First clear away creeps between your base and Grom's. After this send Wyverns around Grom's base to clear away the demons guarding Grom. Give the soul gem and any health boosting items to Cairne. Have him and some Grunts (or other meat shields) run through Grom's base. Catch Grom in the soul gem and run back to Jaina's circle.