For the character biography, see C'Thun.

C'Thun (pronounced "Kah-Thoon" or "Kuh-THOON") is the final boss in the Temple of Ahn'Qiraj. Until the release of the original Naxxramas and later The Burning Crusade, C'Thun was considered the most difficult raid boss in the game. 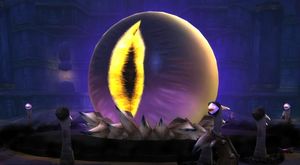 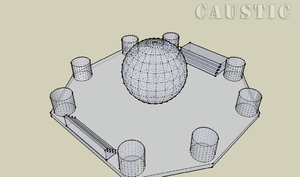 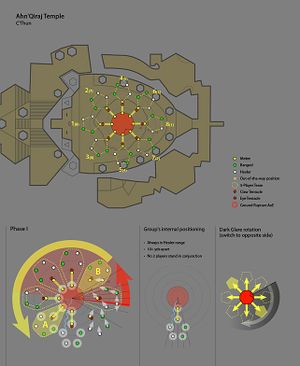 The initial phase of the C'thun encounter, characterized by an alternation between the Eye shooting Eye Beams for 50 seconds followed by 35 seconds of Dark Glare (detailed below) as well as periodic spawning of claw tentacles and eye tentacles.

When first entering C'Thun's chamber, the best strategy is to shield a player with high nature resist and have him enter the room ahead of the rest of the raid. This will cause the first few eye beams (described below) to hit the player with high nature resist, giving the rest of the raid a chance to get into position. A hunter is the ideal candidate for this, with their +60 Nature Resist from their aura and their ability to feign death and then put on normal gear. If the raid enters the room at the same time it is likely that a large portion will die from a chained eye beam.

Alternative strategy at higher levels is that a warrior tank drinks a Rage Potion and pops Spell Reflect. The rest of the raid mounts up and runs into position, while the warrior Spell Reflects eye beams.

2,625 - 3,375 Nature damage. Eye of C'thun casts one every 3 seconds, if other players are standing close (within roughly ten yards) the beam will jump to that person and deal double the damage it dealt to its previous target (actually the damage is multiplied by 1.5, so the second target gets around 4,500-5,000 damage). This repeats indefinitely until the number of targets within range that remain unafflicted is exhausted, so spreading out is key. You may use the C'Thun Warner mod to adjust your distance with other raid members. The initial target is completely random, and the eye will roll around to face its target. This ability can be resisted, up to 100%. Nature protection potions are cheap to make and can absorb nearly all damage. Nature resistance armor is not necessary.

Example result of eye beam hitting in the center of the raid: 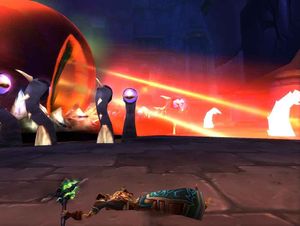 43,750-56,250 Shadow damage on any player who passes through the beam, which appears red and extends radially out from C'thun during the "red phase" of stage 1, where the eye, appearing visibly red, will rotate this beam slowly clockwise or counterclockwise 180 degrees. The initial target is random, but there are signs of where the dark glare will begin, as the eye not only turns red, but a shadowy cloud appears in its pupil shortly before the beam is let loose. It is possible to blink through it.

Every 45 seconds eight small eye tentacles will spawn at the edge of the black expanse which seems to house C'thun, knocking back anyone standing within a few yards of their spawn points, equally spaced in a circle around it. These eyes have a

[Mind Flay] spell that does 750 damage a sec for 3 secs, but are susceptible to many abilities such as counterspell, gouge, and stuns. The Mind Flay is randomly targeted. These tentacles have around 4,500 health. A team of one melee and one caster are enough to kill them in 4 seconds (don't use attacks with long casting time). Other ranged may help, but no more melee or they risk suffering a high-damage Eye Beam. Targeting them may be tricky. You may click their base, use a macro "/target eye tentacle", or press V and click their health bar. Note that it is possible to target them while their graphic is still fading in (while they are spawning). Mind flay is a binary spell, that is, it can be resisted completely (anti-Shadow buffs help), but its damage can't be reduced. The slowing component of the mind flay has been removed, but abilities which remove slowing effects (such as escape artist, shapeshifting, and blessing of freedom) still work to counter the flay.

These tentacles spawn at random locations with alarming frequency at various points of C'thun's room. Their melee is fairly weak: approximately 200 damage per hit, but they also do a one-time knockback when they are spawned called Ground Rupture for 1,350 - 1,650 damage. Additionally, they can do a

[Hamstring] attack, making it more difficult to flee from the dark glare. These tentacles have around 3,000 health. These can sometimes knock players into the Dark Glare. 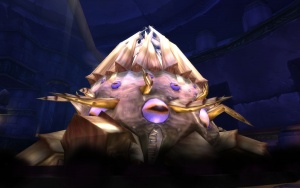 Begins immediately upon bringing the Eye of C'Thun to 0%. If no tentacle is alive, players are taken out of combat and are encouraged to drink during the transition. During this phase, C'thun has a shield which reduces all damage taken by 99%. In order to bring the shield down and damage it, players must engage the stomach from inside (see details below).

These continue to spawn the same as in phase one, however they now spawn every 30 seconds instead of 45 like phase one. It is key in the fight to cover all the area around C'Thun each time small eye tentacles spawn. Again, assigning teams to take down Eye Tentacles is helpful.

Once every minute, with a 30-second offset from Giant Eye Tentacle spawns, C'Thun will summon a Giant Claw Tentacle at a random person's feet. Anyone on or near the spawn will take 3,000-4,000 damage from the Ground Rupture that occurs, as well as being knocked away across the room. They melee for about 1,500 on a well-geared tank with tier 2 gear. They also have a Thrash ability (two extra attacks), meaning they will one-shot anyone who doesn't have a very high armor rating. If no one is in range for an attack they will burrow and re-emerge at full health, repeating the Ground Rupture attack. They have approximately 90,000 HP and there appears to be no cap on the number of tentacles that can be spawned at one time.

Once every minute, with a 30-second offset from Giant Claw Tentacle spawns, C'Thun will summon a Giant Eye Tentacle. They do the same Ground Rupture when they appear, and also melee just as hard. They repeatedly cast the same Eye Beam ability the Eye of C'thun uses in phase one, but they can be stunlocked. They have approximately 36,000 HP and, again, there appears to be no cap on the number of tentacles that can be spawned simultaneously. As with their small version, they are susceptible to counterspell, deathcoil, distracting shot, gouge or stuns. During phase 2, the whole raid is packed together to bring down the tentacles fast, so they are vulnerable to Eye Beam. Therefore, killing and stun-locking Giant Eye Tentacles is a priority. 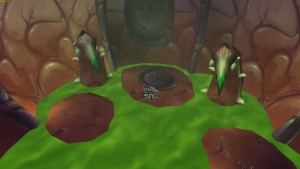 The stomach of C'Thun is an entirely separate room. Every 10 seconds, a tentacle will emerge and swallow a random person in the raid. You fall from the top of the new room into green water, and are given a stacking debuff called Digestive Acid that does a hefty amount of nature damage. The debuff reapplies itself about every 4 seconds, and can stack multiple times; after 20 seconds of being inside the stomach, you will have about 5 debuffs. One application does 150 damage every 3 seconds and stacks up to 99 times, it is also noted that this damage is NOT mitigated by any resistances such as

[Aspect of the Wild].

You can swim out of the green water to one of three small landmasses. One of the landmasses has a blackish circle on it which throws you up out of C'Thun and back to the surface; you can use this to exit at any time. Move to this island and stay near the exit point while your health allows. Nature Resistance potions help to increase the time you can be inside the stomach. Note that if you don't position yourself at the center, you will be bounced against a wall and killed. There are two Flesh Tentacles in the stomach which have about 25,000 HP each and a melee attack. Killing the Flesh Tentacles weakens C'Thun, causing it to turn purple and become vulnerable for 45 seconds. During those 45 seconds you may bring C'Thun down by roughly 1/2 of its hp with all raid alive. If there is a Giant Claw alive, don't stop tanking it. At the end of this phase, C'thun regains its shield and the Flesh Tentacles respawn in his stomach.

At level 80, the C'thun fight becomes much simpler. During the 1st phase (with a group of around 10, although he has been defeated by two players, see videos below) have 1 or 2 people designated to kill the tentacle spawns, and have the rest of the raid DPS C'thun. Be sure that when he Dark Glares that you also don't stand directly behind the glare as, due to a broken mechanic, you might die from the spell as if you were in front of the boss.

For phase 2, have everyone in the raid run around the chamber killing tentacle spawns. Have your tank pick up the Giant Claw/Eye Tentacle when they spawns and the raid burn them down quickly. When a raid member is eaten, unless they are a healer or tank, have them kill the flesh tentacles and come back to the raid. C'thun only has about 900k HP during phase 2, so it should only take 2 weakened phases in order to down the Old God. Additionally, staying in the stomach room for too long WILL kill a level 80. DPS the Flesh Tentacles down and GET OUT. Again, make sure to stand directly in the center of the center platform.

After you have killed him, be sure to turn in the Eye of C'thun at the NPC that is directly behind you, down the hallway to the right exiting the chamber, for easy reputation and some epics that very few people in the game will have.

Start out phase one as normal, with most DPS focused on the eye. Save cooldowns for the weakened portion of phase two. If tentacles are being annoying, feel free to peel off and clear out the room. The green beams can be ignored, as there's no additional players to chain them to. C'Thun will start casting the red beam in 50 seconds after the encounter starts, so try to kill the eye before that point. 1.3 million health in 50 seconds is 25,000 DPS. If C'Thun does start casting the red beam, focus instead on killing the mind flay tentacles instead of the eye while running to the opposite side of the room. The red beam still hits for a decent chunk of health against high-level players, so dodge it.

Once the eye dies, take a moment to clear the room of any remaining tentacles and top off on health during the phase transition. C'Thun still has the 99% damage reduction shield, so players will be forced to enter the stomach. Kill tentacles until a stomach tentacle snags the player. In the stomach room, swim to land, kill both tentacles, then stand in the dead center of the exit platform and jump. C'Thun is now weakened and takes full damage. The weakened phase lasts for 45 seconds and starts the instant the second flesh tentacle dies, before the player gets back to the surface. Back on the surface, pop cooldowns and blow C'Thun up before the weakened phase ends (955,000 health in 45 seconds is 22,000 DPS). Any tentacles still up when C'Thun's body dies will despawn.