Caer Darrow is an island[1] and a ruined keep[2] located on Darrowmere Lake in the Western Plaguelands. Kel'Thuzad established the headquarters of the Cult of the Damned in the catacombs under this ancient human fortress.[3]

The fortress on Caer Darrow was built long ago by humans.[3] It was also the site where an ancient high elven runestone was placed.

During the Second War, the island was invaded by the Horde, the fortress sacked, and the sacred runestone captured.[2] The stone was hewn into pieces which were used to create the Altars of Storms, arcane structures which allowed Gul'dan to instill magic into the Horde's ogre allies.[4]

When Uther the Lightbringer embarked for the isle on a mission of mercy to aid and comfort the survivors of the bloody raid, he was ambushed by privateers from Alterac.[5] In the naval battle that followed, some of the sailors were captured; during questioning in Lordaeron's capital, they confessed their nation's treachery to the Alliance, leading to Alterac's eventual ruin.[6]

Following the Second War, the fortress at Caer Darrow was restored. The manor was the Barov's primary residence amidst their far reaching empire which comprised Caer Darrow, Brill, Southshore, and Tarren Mill, but as the years closed to the Third War, the aristocrats became depressed, greedy, and rageful. After decades of rule, in order to preserve their fortune and hold of the land well past their lifespan, the Barovs made a deal with Kel'Thuzad, leader of the Cult of the Damned. The once opulent keep of Caer Darrow secretly became the horrific Scholomance, a school of necromancy.[7]

Six months passed and the keep became decrepit and inhabited by dark undead beings. Acolytes of the Cult learned their craft, while the family servants were used as experiments for the Plague of Undeath.[7] Finally, while the Scourge did not even yet fully exist in Lordaeron, the plague was unleashed from Scholomance and ravaged Caer Darrow before a visit from Uther the Lightbringer was scheduled.[8] None survived.[9] 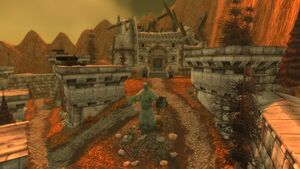 The island and surrounding lake have become lifeless and still. The spirits of many of the island's inhabitants remain, only visible with the spectral essence given by the manor's former servants. The ghosts are cursed to relive the last memory they had before the town was destroyed.[9]

Weldon Barov has recently acquired the deed for it. Putridius guards the entrance to Scholomance.

While looking for clues to the Scepter of Sargeras' location, a warlock adventurer travels to Caer Darrow,[10] discovering members of the Shadow Council gathered there, led by Jergosh the Invoker. With the aid of Braelyn Firehand, the group located and found the Book of Medivh, likely by torturing the Cult of the Damned,[11] but were killed before the book could be returned to Gul'dan. 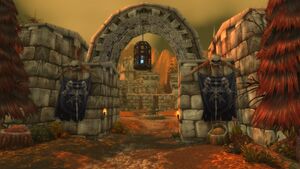 [Spectral Essence] to see the specters.

[The Eye of Divinity] also works.

In the middle of Darrowmere Lake is the solitary Isle of Darrow. The keep of Caer Darrow, perhaps the oldest human monument in the world, stands upon this isle. The keep's defenders abandoned it during the Third War. The ruin may hold many wonders, but unfortunately it crawls with undead and their few remaining demonic allies, including at least three dreadlords.[12]

Speculatively, with the keep being so old, Caer Darrow may have been built during the empire of Arathor.