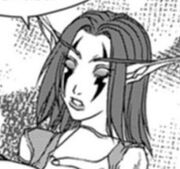 Calandrath is a night elf innkeeper of The Oasis Inn at Cenarion Hold in Silithus. She is originally from Auberdine.[1] From her comments, she grew up around leatherworking, which was likely her father's trade.

Once, a courier delivered her a message for Barnabas Grell. After he returned to the Hold, Calandrath gave him the message.[2]

Oh you poor thing, you're covered head to toe in sand! Please feel free to rest and rejuvenate yourself here at this beautiful oasis.

You're a leatherworker by trade, aren't you? It's that faint smell of cured hides, I'd recognize it anywhere.

My father used to talk about a famous artisan who lived in Southwind Village centuries ago. It's a shame the place is in ruins now.

I wish to browse your wares, Calandrath.