Calder Gray is a really insane Forsaken quest giver found in Desolation Hold in the Southern Barrens, where he with the help of the adventurer creates Gray's Abomination from various corpses. He is also seen in Twilight Highlands, where his creation is one of the matches of the Crucible of Carnage. Calder Gray had been unceremoniously booted from Orgrimmar, hauled through the main gates. Unknown exactly why, it's likely to do with his... "research".

During the invasion of Draenor he becomes available as a follower in commander's Garrison, where his Alliance counterpart is Draeken Nightspear. 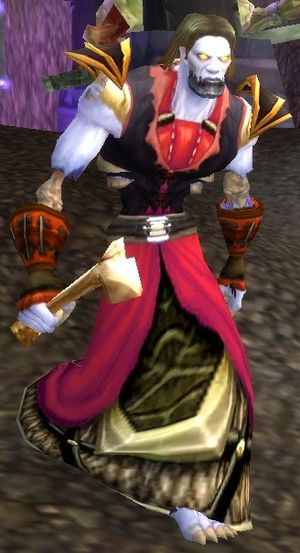 At the Crucible of Carnage.

Southern Barrens
It was dreadful, <class>. Unceremoniously booted from Orgrimmar, jars of fresh squirming body parts smashed to the ground as I was hauled through the gates.

Fortunately I've been able to continue my research here, where there's no shortage of fresh corpses.

<A cockroach slithers from Calder's mouth and scurries back into his skull through an empty eye socket.>

<You find Calder idly picking at his ear with a dagger.>

<On seeing you approach, Calder re-hinges his jaw to speak with you.>

It's alive, <name>. It's alive!
Go forth, my beautiful angel! Ah, it is so very sad when one's children leave the nest, isn't it?

After the player has completed the Southern Barrens quest chain: