Calis Wraithson was a random hero lich in Warcraft III. 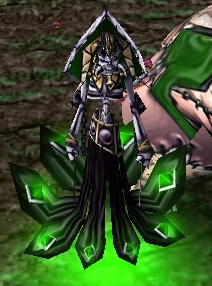 As seen in Warcraft III: Reign of Chaos.

Calis Wraithson was the leader of a green Undead Scourge base located near Hearthglen. One night he and Venim Iceblade decided to attack the city and all the nearby villages. They sent an Undead Caravan to the villages and undead armies toward Hearthglen.[1]

Meanwhile in Hearthglen Arthas arrived, killed the infected villagers and destroyed the caravan. He then prepared the defense of the city. After a long and unsuccessful siege Calis Wraithson decided to attack by himself, but just as the situation appeared grim for Arthas and his men, Uther the Lightbringer and his Knights of the Silver Hand arrived and defeated the undead.[1]

Calis, however, managed to survive and retreated to Northrend. The next month Arthas arrived Northrend to hunt down Mal'ganis and found Calis in another green undead base. Calis tried to kill Arthas and all his warriors, but they were reinforced by Muradin Bronzebeard and his dwarves, who successfully launched a counter attack, killing Calis and destroying his base.[2]

He has been since replaced with randomly named liches.