For other uses, see Call to Arms (disambiguation).

The Call to Arms dungeon system offers additional rewards for max level players solo queuing for max-level heroic dungeons as the currently least represented role. The system is offered through the Dungeon Finder. 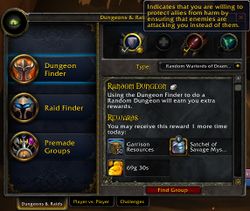 Any time the Dungeon Finder queue is longer than a few minutes, the system will automatically determine which class role is currently the least represented in the queue, and offer that role additional rewards for entering the Dungeon Finder queue and completing a random heroic dungeon. In the case of tanking being the least represented role, the “Call to Arms: Tanks” icon will display where class roles are chosen in the Dungeon Finder UI, and will also display on the UI when the queue pops and you are selected to enter a dungeon. Regardless of your role, you’ll always be able to see which role currently has a Call to Arms, if any.

To be eligible for the additional rewards you must solo queue for a random max-level heroic in the role that is currently being Called to Arms, and complete the dungeon by killing the final boss. Every time you hit these requirements (there is no daily limit) you'll receive a

If a member leaves the party (either voluntarily or by being kicked) during a dungeon, and you choose to search for a new member to replace them, the new search will reset the Call to Arms process. Therefore, if your role is no longer eligible for Call to Arms when you re-queue, you will be ineligible from that point to receive the additional rewards.

The system is intended to lower queue times for dungeons. Since tanks and healers are usually far harder to find than those performing a DPS role, the system attempts to encourage players to play dungeons in tanking or healing specs, by offering extra rewards for these roles.

As stated by Bashiok in the 4.1 Preview -- Dungeon Finder: Call to Arms blog:

The inclusion of this system is to address the unacceptable queue times currently being experienced by those that queue for the DPS role at max level. The long queue times are, of course, caused by a very simple lack of representation in the Dungeon Finder by tanks, and to some extent healers. We don’t feel the tanking and healing roles have any inherent issues that are causing the representation disparity, but simply that fulfilling them is more responsibility. Understandably players prefer to take on that responsibility in more organized situations than what the Dungeon Finder offers, but maybe we can bribe them a little. While this system gives tanks and healers something extra, the incentive is there so that we can help those in the DPS role get into more dungeons, get better gear, and continue progressing.

We think it’s a pretty solid incentive to get tanks and healers queuing, give max level players another way at the pets and mounts they so desire, and bottom line get queue times down for all those DPS’ers out there.[1]