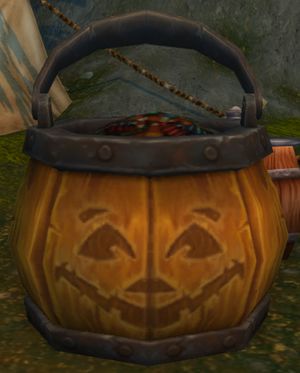 During the Hallow's End event, each inn has a Candy Bucket which both starts and ends this quest. Clicking a candy bucket offers the option to take a handful of candy; taking the handful of candy completes and gives you credit for the quest. There is no separate turn-in. Each candy bucket has a separate instance of this quest. You can loot each one once during the event.

[Hearthstone] there. Buildings that look like inns but have no innkeeper, such as in Moonglade, do not have Candy Buckets.

Candy buckets like this are located in inns throughout the realms. Go ahead... take some!

There is currently an issue regarding looting candy buckets in Northrend.

We are currently experiencing an issue with the Hallow's End candy buckets that is affecting the Trick or Treat Achievements for this event. Certain candy buckets in Northrend, once looted, are preventing characters from looting some of the Candy Buckets required for the Trick or Treats of Eastern Kingdoms, Kalimdor and Outland. The current way to work around this is to get the candy buckets from Eastern Kingdoms, Kalimdor, and Outland before doing any in Northrend.

Note, doing the Achievements first will prevent some of the Northrend Candy Buckets from being intractable.

We are actively working on a resolution for this and will provide more information when it is available.

Trick or Treat! achievement requires you to take a Handful of Candy from the Candy Bucket in any inn.

There are several tracking achievements to keep track of which Candy Buckets have been looted from the friendly or neutral inns on a continent:

Tricks and Treats of Azeroth requires the character to complete all three of the preceding achievements.

Candy Bucket "quests" are tracked individually, to keep a character from double-dipping. The links to external databases point to the search result showing all of these quests.