For information on the practice of cannibalism in WoW, see Cannibalism.

Cannibalize is a Forsaken racial trait which allows players to feed on a humanoid or undead body to regain health and mana.

This ability is similar to that of ghouls, ravenous undead cannibals who could regenerate their wounds by eating the flesh of fallen warriors.[2]

Forsaken are undead, and thus are unable to heal without magical aid. Studying ghouls and abominations, some Forsaken mimic their ability to devour flesh to restore their own. Historically, trolls are cannibals, and have learned to consume flesh to accelerate their own healing. Cannibalizing the corpse of a good or intelligent neutral creature is an evil act. A cannibalized corpse is befouled.[3]

Necromancers have learned how to cannibalize through a Cannibalize spell. With the spell, the caster gains some of the traits of a ghoul, especially the creature’s bone-cracking jaw and extended tongue. The caster may consume flesh from a corpse to regain health. The spell works only on dead creatures and heals only the caster. The corpse must be mostly intact and must have a true anatomy (e.g., the caster cannot cannibalize oozes). Once a corpse has been consumed, very little flesh remains and the corpse is no longer considered intact. A corpse can thus be the target of the spell only once.[4] 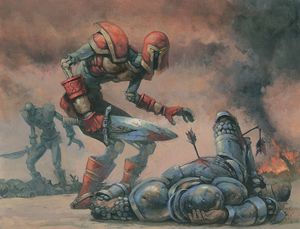 In World of Warcraft the corpses can be cannibalised as many times as the player wishes to do it until it vanishes by itself. The Warlock spell Demon Armor/Demon Skin increases the amount of health gained through Cannibalize. Strangely, Cannibalize works on immaterial Ghosts and Wraiths.