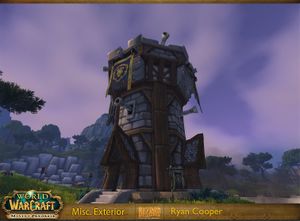 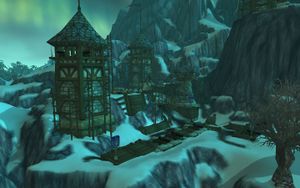 A cannon tower in Fordragon Hold.

Cannon towers are armed scout and watch towers, dedicated to defending settlements instead of just detecting approaching armies. They are armed with powerful cannons.

Cannon towers were scout towers outfitted with great cannon that while powerful, couldn't attack threats from above.[1]

Cannon towers were watch towers upgraded to rain explosive death down upon their foes on land and sea.[2] 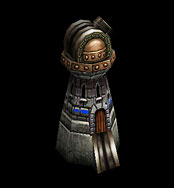 With the study and understanding of gunpowder, scout towers may be modified to house cannons making them cannon towers. The artillery provides increased bombardment of attacking forces, limited only by the restriction of being unable to attack flying invaders. Rows of these sturdy towers provide a formidable defense against even the most aggressive assaults.[3]

While human scout towers are plentiful, there was no dedicated cannon tower model until patch 5.1.0. Cannon towers were home-made by putting cannons on top of or inside of normal towers.

In Warcraft Adventures, one scene was supposed to happen in a cannon tower near a gryphon aviary northeast of Tyr's Hand.