Captain "Soggy" Su-Dao is the leader of the Anglers at Soggy's Gamble in the Dread Wastes. Dog the lion seal is his best friend and has saved his life on more than one occasion.[1] Su-Dao was supposed to take his ship, the Mist-Hopper, on a routine fishing trip off the coast of the Jade Forest, but he instead ended up taking his crew on a wild journey past the Serpent's Spine that ended with the boat sinking into the sea.[2]

Su-Dao asks adventurers to take Dog for a swim on the Shelf of Mazu[1] and to recover the charter for the final voyage of the Mist-Hopper, in the hopes of hiding the truth about the journey from his crew. To his surprise—and, later, relief—the charter tube instead contains a letter from Deck Boss Arie informing him that his crew already knows that he wasn't supposed to take them on a dangerous misadventure beyond the wall, but that they're thankful that he did and that they'll gladly follow him anywhere.[2]

After the leviathan Jiao appears off the coast and kidnaps Master Angler Ju Lien, Su-Dao sets out with adventurers in the Mist-Hopper Jr. to fight it off with harpoons, eventually causing it to retreat back to sea and saving the town.[3] 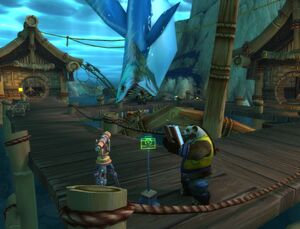 Main article: Old Age and Treachery#Notes
Main article: The Mariner's Revenge#Notes
Gossip
Don't mind those two idiots outside - they're caught up in some fad called "sharking."
I'd wager they feel pretty dumb about that picture in a couple of months.

[90] The Mariner's Revenge
Ahh, it feels good to get salt in the old fur again.

I'd wager they feel pretty dumb about that picture in a couple of months.

Clicking the Eroded Bust
Beautiful, isn't she? Fished it up a few years go[sic] - it looks just like her... Ask me about it some time.

After interacting with the bust, a new dialogue option becomes available:

Tell me about the statue, Soggy.

I saw her, you know.
Mazu. The goddess of the sea.
Worst storm of my life. I was young and inexperienced. I went overboard. Everything went dark - I was done for.
Then she appeared before me, clear as a summer afternoon. Beautiful like you couldn't imagine - shells around her neck and strings of pearls on her hips. She smiled and held out her slender arm.
Next thing I remember, Dog had me on his back at the surface and the crew was pulling me aboard. Never saw him before - crew said he came out of nowhere. But I know where he came from.