Captain Arnath is a blood elf among the ranks of the Argent Crusade, he can be found in Zul'Drak.

When the Frostwing Halls opened in the Icecrown Citadel Arnath and a few others were added as well. After players reach the Upper Spire, five NPCs teleport in using the Scourge Transporter and proceed to run to the entrance of the Frostwing Halls, awaiting the players to join them.

While fighting through Icecrown Citadel, it is possible that Arnath will be slain by Sister Svalna and raised from the dead to fight against you. This, however, is a non-canon outcome.

He joined the Silver Hand and is located in the Sanctum of Light.

The enemy has been cleared from the area for some time now. 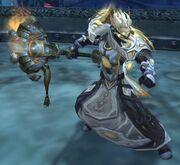 Before the battle
Even dying here beats spending another day collecting reagents for that madman, Finklestein.

Raised
You miserable fools never did manage to select a decent bat wing.

Killed a Player
That was for bringing me spoiled spider ichor.

Second death
Don't... let Finklestein use me... for his potions...

After Sister Svalna's death
The loss of our comrades was unpreventable. They lived and died in the service of the Argent Crusade.