Captain Auric Sunchaser is a level 70 quest ender located at Allerian Stronghold in the contested territory of Terokkar Forest. Until Alleria returns, Auric is the captain of the high elves of Allerian Stronghold. He greets players by their military rank. It appears that he has replaced Talthressar. 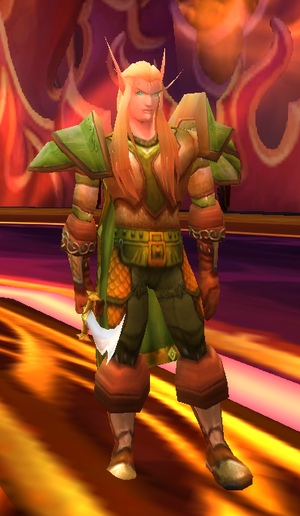 Auric Sunchaser appears in the Sunwell Plateau during the final part of the Quel'Delar quest chain, as the high elf representative. He is seen alongside the regent lord of Quel'Thalas, Lor'themar Theron, and Grand Magister Rommath at the site of the restored Sunwell.

For blood elf players, Auric joins Lor'themar and Rommath in congratulating the sin'dorei hero who had restored the blade. He states that now is the time to rally behind the bearer of Quel'Delar and avenge the destruction of their lands, referencing the quel'dorei and sin'dorei collectively as the "children of Silvermoon."

For non-blood elf members of the Horde and members of the Alliance, Auric is present when Lor'themar attempts to claim Quel'Delar for "its rightful owners." When the blade does not accept the regent lord and hurls him back across the plateau, Rommath holds Auric responsible for this apparent treachery and the Sunwell guardians surround him with weapons drawn. Auric defuses the situation after inferring that Quel'Delar decides upon its owner, and not the other way around, citing Lor'themar's foolishness as the reason behind his injuries. Rommath grudgingly calls his guards off, though warns Auric to watch his tongue in this holy place.

Auric then congratulates the player himself for their accomplishment in restoring the blade, after Rommath brusquely orders the player to "take the blade and begone."

Yes, <rank>, what matter of import do you have to bring to my attention?