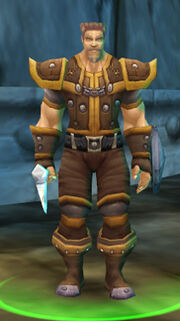 Captain Danuvin is a level 33 quest giver located in Sentinel Hill in the human territory of Westfall. He is affiliated with the Westfall Brigade.

He was previously part of the People's Militia.

He was present during the Legion Invasions.

The thieves think they can drive us from our lands. Those who have taken up arms alongside Lord Stoutmantle don't just fight for their farms back, we fight for human dignity. Join us in Lord Stoutmantle's crusade to liberate Westfall from this tyranny.