"You know that I refuse to die while the Legion still stands, High Exarch."

Captain Fareeya is a Lightforged draenei and high-ranking member of the Army of the Light. As one of High Exarch Turalyon's chief lieutenants, Fareeya is responsible for issuing orders to the army, as well as commanding forces in the field. She is also personally in charge of a small unit of elite Lightforged champions, some of the best the Army of the Light has to offer.[1]

Fareeya, along with the other Lightforged, waged a millennia-long war against the demonic Burning Legion and their Crusade, since the fall of the eredar home planet of Argus. They took part in the Argus Campaign alongside forces from Azeroth to bring a permanent end to the Burning Crusade.

In the wake of the final victory on Argus, the Army of the Light would pledge their support to the Alliance, and continue to operate and train more Lightforged draenei from the Vindicaar.

Army of the Light

Fareeya lived on the planet Argus, home of the original eredar race, at the time of its fall to the fallen titan Sargeras. Fareeya herself served in a military capacity, with Commander Atalaa as her second-in-command.[2]

Though many of the eredar would join their leaders Kil'jaeden and Archimonde in pledging their loyalty to Sargeras, Fareeya was part of a smaller group (later known as the draenei) that chose to side with Velen. Velen's followers made a desperate escape from their homeworld through the benevolent naaru's dimensional ship named the Genedar. Before fleeing the planet, Fareeya had the blacksmith Gaal create an elaborate key to secure the Armory of the Triumvirate, which he forged from a pristine argunite crystal.[3] The armory was locked, and the last time Fareeya saw her, Atalaa was leading a force to secure it. Atalaa succeeded in her mission but died at some point afterward, her spirit eternally focused on guarding the

[Armor of the Triumvirate] within. Unlike Fareeya, Gaal did not make it to the Genedar but would survive as one of the Broken.[4]

The elite soldiers of the draneei, including Fareeya, would eventually part ways from the other exiles aboard another ship called the Xenedar with the naaru Xe'ra in order to fight the Burning Legion across the cosmos. They became known as the Army of the Light and were infused with the Light, becoming immortal Lightforged.

Fareyaa would thus command Lightforged forces in combat and secure numerous small-scale victories against the Legion. Despite the cunning and tenacity with which they fought the demons, however, they could not stop them alone, and were losing the war by the time of the Legion's third invasion of Azeroth.[5] 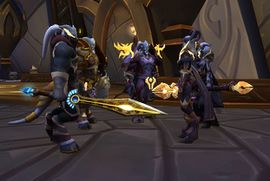 The Army of the Light coordinated one final assault with the forces of Azeroth on the Legion homeworld of Argus. As the Azerothian forces arrived aboard the Vindicaar to rendezvous with the Xenedar, the latter was struck down by heavy Legion artillery and crashed into the wastes of Krokuun. Fareeya, and the other leadership of the Army of the Light, would survive the crash and establish small bases in the Shattered Fields.

As Turalyon and his ally made contact with the survivors of the crash, they were ambushed by the powerful demon Taraafash. Fareeya herself struck from behind, however, slaying the eredar brute. She then briefed the High Exarch on their situation.[6] Working with the champions from Azeroth, she also directed efforts to salvage resources from the wreckage of the Xenedar[7] and worked to defeat High Inquisitor Raalgar.[8]

After the operations in Krokuun, Fareeya boarded the Vindicaar with the other leaders of the Argus Campaign. There, she fully reunited her unit of elite troops including Archmage Y'mera, Grand Vindicator Sorvos, Blademaster Telaamon, and Baraat the Longshot. As the search for the pieces of the Crown of the Triumvirate continued, Prophet Velen took Fareeya and her troops with him to the region of Mac'Aree to seek the Crest of Knowledge.[9]

At the Conservatory of the Arcane, the group was ambushed by a massive force of demons, with Velen himself cut off from Fareeya and the main forces. But Turalyon arrived with reinforcements and later rescued the Prophet. At the same time, Fareeya headed an effort to rescue her soldiers cut off in the field.[1] The Crest of Knowledge would ultimately be secured, and the Crown of the Triumvirate restored.

When the time came to launch the final assault on Antorus, the Burning Throne, Captain Fareeya was one of the front line commanders, as the Army pushed through the demonic fortress. From the Vindicaar, they were able to hold the line against the Legion long enough for other forces to eventually bring about the imprisonment of Sargeras in the Seat of the Pantheon, thereby ending the Burning Crusade. Fareeya returned triumphant with the other victors on board the Vindicaar, leaving Argus behind and finally having completed their ancient mission.

In the aftermath of the Argus Campaign and the victory over the Burning Legion, Fareeya and the Lightforged maintained their new headquarters on the Vindicaar. They continued to train and initiate new draenei as Lightforged, the progress of whom was overseen by Fareeya personally.

In the lead-up to the Fourth War, High Exarch Turalyon would pledge the allegiance of the Lightforged, who desired to fight for and alongside their kin once more, to the Alliance. Captain Fareeya herself deeply approved of this course of action.[10]

Fareeya may have earned her title, The Crescent Glaive, from her proficiency with her weaponry.