Marshal Gryan Stoutmantle is a human paladin and quest giver of the Alliance located at Sentinel Hill, Westfall. He can also be found in the Grizzly Hills and a younger version of him can be found in the Caverns of Time: Culling of Stratholme. 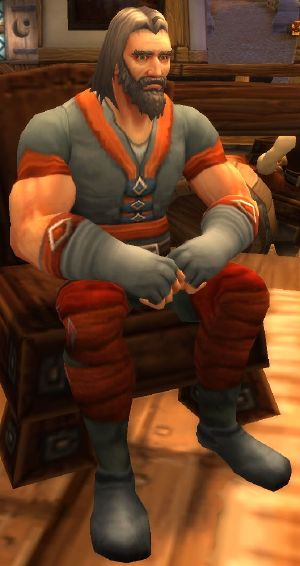 Gryan Stoutmantle was present when Prince Arthas Menethil purged the city of Stratholme, killing almost all of its citizens to prevent them from becoming part of the Scourge. What role Gryan played in those events is unknown, but he clearly managed to get out of there alive.

When the Defias Brotherhood emerged, Gryan left the Third War to tend to the troubles back home in Westfall.

Gryan once did Wiley a favor, and he now owes him.

Due to the corruption of the Stormwind House of Nobles, Westfall did not get the military support it would have needed to defeat the Defias Brotherhood. Feeling that Stormwind had abandoned them, Gryan founded, and became the leader of, the People's Militia.

In his efforts to defend the people of Westfall from the Defias, he recruited young Heroes of the Alliance to aid him, and with their help many of the Defias were killed.

Gryan and the People's Militia captured a thief trying to steal Saldean's wagon. They forced the thief, who became known as the Defias Traitor, to show them the location of the Defias secret Hideout. Thanks to this Gryan found out that the leaders of the Defias Brotherhood were hiding in the Deadmines, hidden in the town of Moonbrook. Once again he called upon the Heroes of the Alliance, and sent them on a mission to kill the Defias King-Pin, Edwin VanCleef, himself.

The Heroes succeeded and Westfall was safe once again.

At some point after these events, Gryan Stoutmantle traveled to Silverpine Forest and saw the grave of Arugal.[3]

As Westfall was safe once more the People's Militia was renamed the Westfall Brigade and was established as an official army of Stormwind. Gryan Stoutmantle was promoted to Captain and became the <Commander of the Westfall Brigade>. He established the Westfall Brigade Encampment in the Grizzly Hills, Northrend while attempting to find alternate ways into the northern regions of Northrend and secure resourses for the Alliance. He left half of his soldiers in western Grizzly Hills to fight the Horde for control of Venture Bay and the vast amounts of lumber. Stoutmantle halted Brugar Stoneshear's, and the Explorer's League's research of Thor Modan in order to make use of the tunnels for military purposes.

The young Walter is his squire.

Some time during Gryan's deployment in Northrend, he stayed in Valgarde and befriended Thoralius the Wise, who would later go to Westfall and assist the Westfall Brigade with their investigation of the resurgence of the Defias Brotherhood.

Back to Sentinel Hill

Gryan Stoutmantle was promoted to Marshal and returned to Sentinel Hill in Westfall. He now leads the Westfall Brigade in trying to restore Westfall to its former glory. Sentinel Hill was reconstructed but is constantly under attack. 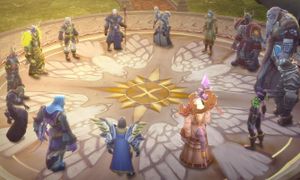 Gryan with the other class order champions, Khadgar and Velen.

Stoutmantle joined the Knights of the Silver Hand and led the defense of Westfall during the invasion of the Burning Legion.

He later traveled to the Sanctum of Light beneath Light's Hope Chapel.

Stoutmantle was one of the order hall champions who met Khadgar and Velen at Krasus' Landing to discuss the Pillars of Creation.[4] 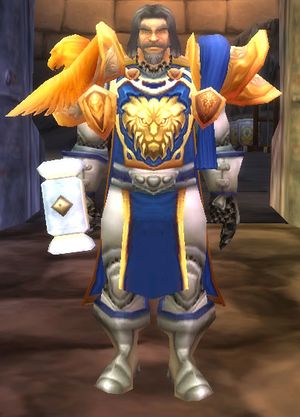 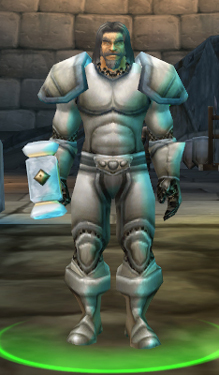 Stoutmantle's gossip text changes depending on how much questing you did in the pre-Cataclysm version of Westfall.

No quests in Westfall

If the player didn't do any quests in Westfall:

I left a war once to tend to the troubles back home in Westfall. That seems like a lifetime ago. Thank the Light that the Defias are no longer a threat.

We're a long way from home up here, but if we don't win this battle, there may not be a Westfall to return to.

No quests in Deadmines

If the player didn't complete

Hmm... something familiar about your face <race>... Give me a moment...

Ah ha! Westfall, that is where I recognize you from. You are <name>! It's good to see you again. But, let's hope you can help us finish the job this time.

Now we're a long way from Westfall up here, but if we don't win this battle, there may not be a home to return to.

If the player killed VanCleef and delivered his head to Stoutmantle:

<Name>! I hardly recognized you in your new outfit. Still have that tunic... or did you take the chausses... or was it the staff? I can't recall, it was so long ago...

Well, I'm glad you are here to help out again. We could use all the help we can get. <Name>, if you perform the way you did back in Westfall with the People's Militia, we have a chance.

These are dire times, if we don't win this battle, there may not be a Westfall to return to.

With the Light's blessing and your help, <name>, the Defias are no longer a threat.

But we're a long way from Westfall up here, and if we don't win this battle, there may not be a home to return to.

The war in Northrend took its toll on us as a people, <name>. While we were victorious in the frozen wastes, our own land fell into disarray.