Captain Placeholder was originally created purely as a temporary measure in the beta version of the game, allowing players to instantly teleport from Menethil Harbor to Auberdine, when some of the boat paths had yet to be implemented. His counterpart, Captain Noteo, would take travelers from Auberdine to Menethil Harbor.

After the retail launch, a glitch in the normal operation of the Menethil Harbor-Auberdine boat path prompted Blizzard to reinstate Captain Placeholder until a fix was included with patch 1.4.0.

In the mean time, Captain Placeholder quickly became quite popular among players due to his ability to instantly teleport players to the other continent at their own leisure, instead of waiting for the boat to arrive. He was a popular source of jokes for players, so when Blizzard removed him, some "fans" of the NPC petitioned Blizzard to bring him back in some form, and others created a song called the Lament of Captain Placeholder.

Placeholder, now Cap'n Placeholder, returned in the Cataclysm beta as a level 85 elite, Horde-aligned character with a new model. He could be seen dancing on the Rocketway, and appeared to serve no purpose. He was not present when Cataclysm went live.

Placeholder is also referred to in a dialog in Menethil Harbor. Bart Tidewater, staring at wreck of the Maiden's Virtue, has the following conversation with Red Jack Flint:

This dialog suggests that Placeholder was promoted to admiral, perhaps prior to his appearance on the Rocketway. This was confirmed when he appeared later in Mists of Pandaria beta.

Placeholder, now promoted to Adm'rl Placeholder, appeared again in Mists of Pandaria beta as level 95 elite, standing in Orgrimmar and Stormwind City. He transported players to the Valley of the Four Winds, while Jade Forest was disabled because of a major revamp.

His pose is reminiscent of the logo for Captain Morgan rum, and his title references "The Most Interesting Man in the World", an advertising campaign for the Mexican beer brand Dos Equis.

Oh, ho! Oh ho ho.
Yo ho ho, even.
I just come back from the land of Pandaria, with its rolling hills and harsh mountains, and the strangest rum I ever tasted. I crashed me ship into the Jade Forest and me cargo made the land uninhabitable, but in the meantime I can take ye to the Valley of the Four Winds, lickey-split.
Do yeh trust me, <class>?

A different Captain Placeholder, a ghostly night elf hovering above the ground, was seen at the Lunar Crucible in Moon Guard Stronghold prior to patch 7.1.0. Based on some non-English localizations of the game, it seems his name was supposed to be Latosius Silversong, but the developers forgot to change it in the English version.

Greetings. I am here to test your strength.

In patch 7.1.0, he was replaced with Kir'altius, who now gives the world quest 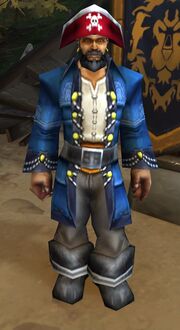 Dread Cap'n Placeholder was found at the Overspark Expedition Camp on Mechagon Island during the PTR.