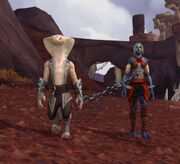 A Captured Exile being transported by a Faithless Raider.

Captured Exiles are exiled Zandalari trolls that are mainly seen being delivered by Faithless Raiders to the Crater of Conquerors in Vol'dun. Raiders will periodically appear, dragging a Captured Exile in chains, and drop them off near some cages just inside the crater's western entrance. The Exile will subsequently kneel down, but shortly after falls over on the ground and despawns. If a Raider transporting an Exile is attacked, the Exile will immediately break free of its chains, run off to the west, and disappear.

Another Exile is found kneeling slightly further into the crater and is regularly beaten by a Faithless Oppressor. If the Oppressor is killed, the Exile will run away to freedom.

While the world quest

[120WQ] Zem'lan Rescue is available, a large number of Captured Exiles can be found as prisoners of the skeletal pirates at the Port of Zem'lan and can be rescued by Horde players.

When freed in the Port of Zem'lan during