Carlin Redpath is a level 59 quest giver located at Crown Guard Tower in the contested territory of the Eastern Plaguelands.

Brother to Captain Joseph Redpath, Carlin fell during the battle of Darrowshire. Although terribly wounded, he was not slain. Days later, agents of the Argent Dawn found Carlin wandering, weak from thirst and fever, near Corin's Crossing. They tended to his wounds and brought him to Light's Hope Chapel. Grateful for their charity, Carlin joined the ranks of the Argent Dawn and now fights a battle of vengeance against the Scourge.[1] 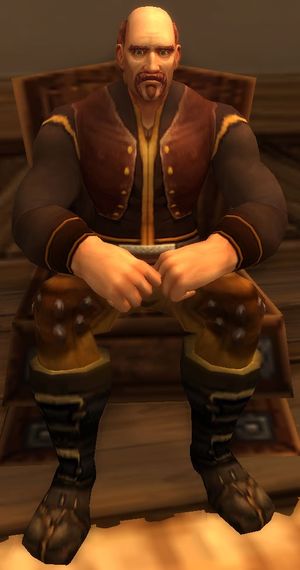 Carlin in Culling of Stratholme.

Carlin Redpath can be found in the Road to Stratholme staying on the second floor in an inn on the outskirts of Stratholme. He is with his family including, Joseph Redpath, Pamela Redpath (along with her doll), and Marlene Redpath.

We have all been witness to terrible tragedies, but we must not let them drag us to despair.

Instead, hold those memories close so that one day, we might find a reckoning.

He might have been the Redpath referred to in the quest

[38] Daelin's Men, which would have made him a member of the Theramore city guard at some point.

It is possible that he is related to Marcus Redpath.