For the mob, see Carrion Grub. 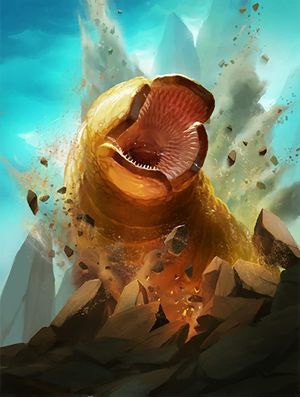 A carrion grub in Hearthstone.

Carrion grubs (also called carrion worms[1][2] and maggot beasts[3]) are carrion-eating larvae living in plagued areas of Azeroth. They are especially living in the scourged zones of Loradaeron.

These worms are notable for rarely dropping

Note that sometimes this model is used for the young of other creatures that are not carrion grubs.

The meat of a carrion grub is suitable for consuming.[4] While rather bland in taste, it can easily be preserved to last for months.[1] 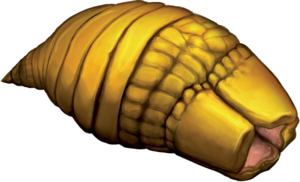 Carrion grubs are disgusting larva that roam the Plaguelands searching for corpses to consume. They devour prey by gripping it in acid-coated mandibles, dissolving it, and sucking it up through their relatively tiny mouths. If they cannot find dead or dying creatures to feed upon, any living flesh will do. Carrion grubs prefer mammals, but will dine on reptiles or fish — they are voracious eaters that can consume close to half their body weight in a day. They cannot digest vegetable matter. Carrion grubs roam only, and have appeared the Plaguelands there only in recent years. It is unclear if they are the result of horrible experiments by overzealous necromancers, or simply a mutation created by the Scourge. Since they pursue undead flesh as readily as the living, it seems unlikely anyone created them on purpose. It is a fat, sickly, human-sized yellow worm that undulates its way along the ground, a trail of sizzling slime in its wake. Smallish pincer-like mandibles, dripping with green ichor, extend and retract from a tiny sucker-like mouth.

Carrion grubs move about haphazardly, constantly seeking food. If they detect suitable prey with their blindsense, they move to investigate, attacking rapaciously if the prey proves edible. If the food source moves out of blindsense range, the grub continues moving in the same direction until it catches up, comes to an obstacle, or detects another food source. Although grubs are stupid, their blindsense is quite acute and they will not, for example, pursue prey over the edge of a cliff. If confronted by a foe that cannot be attacked, such as flying archers, the grub escapes by burrowing. A carrion grub can wriggle its way only into soft earth, sand, or materials of a similar consistency. Most carrion grubs are six to eight feet long and weigh three hundred to five hundred pounds, although much larger specimens exist. Carrion grubs attack the nearest source of food, although particularly juicy targets draw more attention. Thus, a grub goes after a human before a gnome and a tauren before a night elf. Particularly large or overweight individuals might also become preferred targets. If a large enough source of food is available (such as a corpse), a grub stops attacking while it dissolves and digests the offering. However, if attacked while feeding, it defends itself. If possible, a carrion grub charges and overruns a foe if the size difference between them is not too great. If the grub successfully overruns, the target is automatically subjected to an acidic slime attack. When slain, a carrion grub bursts apart, releasing a shower of acid similar to an acid spray.[5]