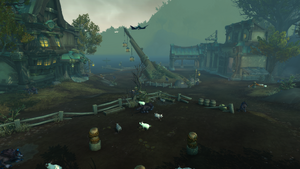 Carver's Harbor is a slaughterhouse located on the west seaside Drustvar. Before the arrival of the Heartsbane Coven, Carver's Harbor was a meat market, with a dock by the sea. It employed some of the greatest butchers ever seen.

Following the arrival of the Coven, a witch planted a Pig Effigy witch turned all the workers into pigs. The area was subsequently taken over by hexed howlers and their prized butcher, Roland Hacksaw, was subsequently enslaved by the coven.

Thomas Staughton was the only one to escape and now seeks desperately to save his co-workers from becoming minced meat. The delay in meat delivery forced people like Elijah Eggleton to ask what happened at the placed and has started sending adventurers to investigate.[1]