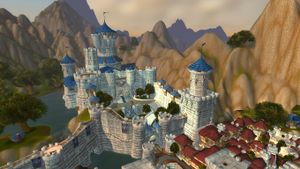 Castles are the center of large human and Alliance military cities. The human castles of the Warcraft universe harken to a medieval style,[1] but several races like the elves and mogu are known to also build fortified palaces.

Stormwind Keep was the seat of power of the human kingdom of Stormwind during the First War.[2]

The mighty castles of Lordaeron were the center of large military cities. As with the lesser keeps, peasants could bring gold and lumber here for judicious dispersal in order to sustain the war effort. These bastions against invasion were guarded by fortified battlements, making them virtually indestructible. The castle represented the strength of the peoples of the Alliance and their unyielding resolution to defend the whole of humanity against the Orcish Hordes.[3]

Stormwind Keep itself was represented in-game by a generic keep building that was eventually upgraded into a castle by the human AI.[4] Several unnamed castles also appeared during the campaigns of the game, for example in Alterac City, Capital City and Kul Tiras.

Castles represent the pinnacle of advanced human civilization. With this advancement comes the ability to support stables for housing the war-steeds of the heroic knights. This progression also allows the building of gryphon aviaries.[5]

During the Invasion of Durotar, Admiral Proudmoore had a unique Castle built in Tidefury Cove, surrounded by four Castle Guard Towers.

The Castle helped the high elves to fend off Arthas and the Scourge as he tried to attack their capital city of Silvermoon City and Quel'Thalas in Warcraft III: Reign of Chaos by serving as a returning point for gold and training units. However, the Castle couldn't be built by the High elf worker unit likely due to the limited ability of the map editor prior to the Warcraft III: The Frozen Throne expansion. With the addition of The Frozen Throne expansion's map editor, it is possible to make additional groups with building orders.

The castle also helped the blood elves and Kael'thas during the Curse of the Blood Elves campaign in The Frozen Throne. This castle produced unique blood elven-only units. Kael himself once used a Tiny Castle during his campaign.

A castle is a keep usually surrounded by a 15-foot stone wall with four towers. Huge castles have a particularly large keep with numerous associated buildings (stables, forge, and the like) and an elaborate 20-foot high wall creating a bailey and courtyard areas. The wall has six towers. Castle walls are usually ten feet thick.[6]

Gaval Moch is an example of an old and abandoned castle in Silverpine Forest.

Due to the fall of many kingdoms in the Alliance of Lordaeron, not many castles are still left standing in Azeroth. Stormwind Keep was rebuilt after the Second War. Undercity was built beneath the throne room and the royal crypts of the former palace of Lordaeron. The Sunfury Spire palace of Silvermoon City was also rebuilt. As seats of ruling, the Throne of Thunder and the Mogu'shan Palace could also probably be considered as mogu castles.

A fully-upgraded Lunarfall garrison is considered to be a castle.[7]