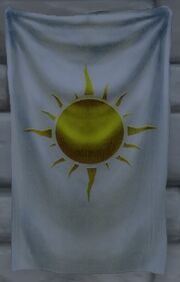 One of the banners marking the entrance to the Cathedral Square.

Cathedral Square (also called the Holy District[1] and Cathedral District[2]) in Stormwind City is so named for the mighty Cathedral of Light which stands as the greatest monument to the Holy Light in Azeroth and dominating its surroundings. The cathedral is the center of the religion of Light and is thus home to paladin and priest trainers, as well as a first aid trainer.

Stormwind citizens often congregate in the Square for conversation, exchange ideas, and the occasional swiped apple.[3] It includes selected shops as well as the headquarters to powerful organizations such as the Argent Dawn. It is also an important civic center, housing City Hall and the orphanage. The extensive Stormwind City Cemetery lies to the north of the square.

The Cathedral Square is regularly visited by school children and their School Mistress Miss Danna who presents it as the center of spiritual enlightenment of the city, and the place where paladins and priests train and study in research of great truths behind the walls of the Cathedral.

To get to Cathedral Square, you can head northeast from Lion's Rest, northwest from the Trade District, or southeast from the Dwarven District.

After the Cataclysm, a statue of Uther replaced that of Alonsus Faol. Terran "Justice" Gregory and Deva Marie honored this great hero's memorial, as many people who stop and also pay their respects.[3] The plaque of the statue reads:

Uther the Lightbringer
A righteous Paladin, an honorable man, and a dear friend. You will never be forgotten, Brother.

[31] An Audience with the King