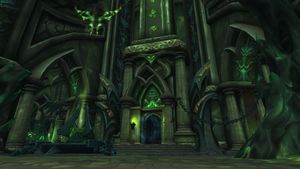 The door to Cathedral of Eternal Night

The Cathedral of Eternal Night is located on the Broken Shore, being the interior of the above-ground sections of the Tomb of Sargeras. It is an instance that was released in patch 7.2.0. The

[Aegis of Aggramar] will play a role in the dungeon. The entrance is on the northwest side of the structure, near the broken bridge to Suramar City.

Something sinister lurks in the upper chamber of Sargeras' tomb. Once a peaceful place of worship, corruption has turned protector into poisoner, with Mephistroth at the helm - and the powerful dreadlord has one aim: to annihilate those who seek to return the Aegis of Aggramar to its resting place.

For Mephistroth, your attempt to infiltrate the Cathedral of Eternal Night is a deeply personal matter. The warlocks among you killed his favored general, Jagganoth, stringing up his corpse and heart in your Order Hall as both a warning and source of power. As for the rest of you, Mephistroth is seeking retribution for your recent brutal attacks on the Broken Shore. The memories are fresh. And revenge is sweet.[1]

The upper chambers of the Tomb of Sargeras were once a place of worship to Elune. Since the Legion's invasion, fel minions have desecrated this holy place, twisting it into their own image. Now, this site will host a battle that could turn the tide of the invasion. While the Armies of Legionfall engage the fel army directly, a small group of heroes infiltrates the upper reaches of the cathedral in a desperate hope to return the Aegis of Aggramar to its resting place.

We're excited to add a new 5-player dungeon to complement the Broken Shore zone and - ultimately - the Tomb of Sargeras raid. Players' ultimate purpose on the Broken Shore is the culmination of all their efforts thus far in Legion: Each of the five Pillars of Creation must be used in a particular place within the Tomb of Sargeras to halt the Legion's invasion and save Azeroth - and the dungeon tells the first part of that story.

While the raid delves deep into the foundations of the Tomb, revealing mysteries and varied horrors, this dungeon ascends the spire, focusing on the dark majesty of a tarnished monument to the glory of the goddess Elune. Entering atop a balcony overlooking the grand central hall of the Cathedral (a room that will later serve as the setting for the first boss encounter in the raid), players begin a climb that will take them past moonlit hanging gardens, towards the pinnacle of the tower where the Aegis must be placed. While the dungeon is, of course, rife with Legion presence, we deliberately focused the areas of fel contamination around the portions of the structure closest to the source of fel storm. This amplifies the contrast and allows us to showcase large sections of untarnished elven architecture.[1]