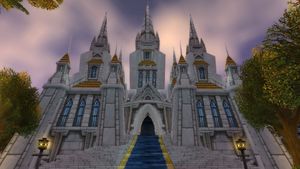 Outside Cathedral of Light 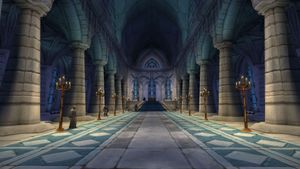 Inside Cathedral of Light

Cathedral of Light (or Stormwind Cathedral)[1] in Stormwind City is the most striking monument of the Church of Light.

The Cathedral is home to some of the most powerful and influential holy leaders in the world. Duthorian Rall is one of Stormwind City's most influential paladins.[2] The archbishop himself used to reside within the hallowed chambers.

Priests and paladins travel to the cathedral from far and wide seeking training and wisdom from their resident counterparts. High Priestess Laurena is the highest-ranking priest trainer in Stormwind City and Lord Grayson Shadowbreaker is the foremost paladin trainer. Brother Crowley is always looking for possible recruits for the Scarlet Crusade and also acts as the Crusade's emissary to the archbishop.

While not barred from the edifice, void elves are not welcomed warmly here as they are not considered appropriate.[3]

During the First War, the original building was badly damaged but its catacombs housed refugees. After the Second War, the building was first to be rebuilt and housed the refugees in the initial stages of city's reconstruction.[4]

The construction of the cathedral was overseen by then-bishop Benedictus and his then-mentor, Archbishop Alonsus Faol. It was here that the Lordaeron Prince Arthas Menethil became a paladin of the Silver Hand.[5]

During the events of the Elemental Unrest, cultists of the Twilight's Hammer tried to blow up the cathedral so disillusioned peasants would flock toward their religion, but they were stopped by an adventurer.[6]

Following the Argus Campaign, King Anduin brought the Forsaken Alonsus Faol to the Cathedral in order to meet Turalyon, the last living member of the first Silver Hand paladins. Their reunion was initially tense, but upon sensing the Light within the undead, Turalyon accepted his former mentor.[7]

Following the Burning of Teldrassil, Wounded Refugees and Mia Greymane are found here. They are being treated by Stormwind Priests.

Mobs (bottom level while on quest)

Every night at sunset, the Cathedral of Light rings a solitary bell whose sweet pitch reaches the entire city.[8]

The Cathedral of Light is depicted close to its World of Warcraft incarnation. It is where the funeral for King Llane is held after his death.