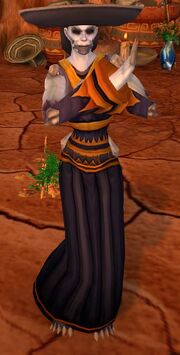 Catrina in World of Warcraft.

Catrina is one of the NPCs involved with the Day of the Dead world event, appearing alongside Chapman at all capital city graveyards. She will transform all who /dance with her and award the achievement

Can you feel it?

The spirit world draws close during the Day of the Dead. This is why we decorate the graves of our dearly departed with flowers and candles and offerings: To welcome them back, even if only for a time.

So come! Dance with me! Let us cherish and honor those we have lost in their ghostly presence, so that they might eat and drink and smile and know that they are loved.

A character named "Catrina Muerte" appears as a legendary card for the priest class in the Rise of Shadows expansion for Hearthstone. This is apparently meant to be the same character as World of Warcraft's Catrina. Catrina Muerte's flavor text reads: "She always manages to lift your spirits."