[Mark of the World Tree] x6

Our invasion plan looks to have backfired. Several of our birds have already reported in, speaking of fires breaking out across the vales of central Hyjal.

Now, many of our druids are stranded out in the field, unprepared for such a large-scale attack. Thisalee was near Ashen Lake, and several others were out in the Regrowth, to the northeast.

Go, <name>! Find them, and make sure that they do not succumb to this backdraft!

[Mark of the World Tree] x6

They've pushed us back to the Sanctuary. We are vastly outnumbered. At this rate, the Guardians of Hyjal stand little chance of survival.

I'm glad you're here with us. 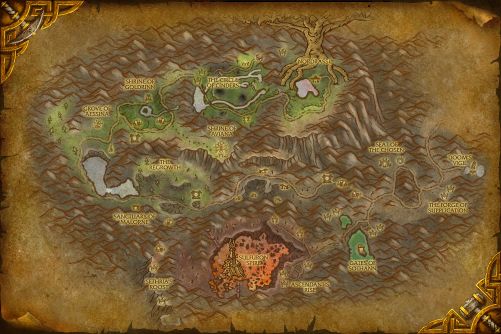 Thisalee is just north, at Tortolla's original position at the Ashen Lake.

Protect Thisalee from the fire elementals!
Thisalee Crow says: Hey, <name>, you're here! These guys came out of nowhere! Help me out while I catch my breath.

Raging Invaders are level 85 unbound fire elementals with 77k health. Kill six. These event mobs are not tagged; so long as players are on the threat list they will get credit when the mobs die.

Thisalee Crow says: I can handle things from here. I'll meet you back at the Sanctuary, <name>.

Head southeast along the road to find Elderlimb:

Protect Elderlimb from the fire elementals!
Elderlimb says: Your arrival is timely, <race>. I tire of fighting these wretched things.

Elderlimb says: I can hold them off from here, <race>. We will meet again at the Sanctuary of Malorne.

Keep heading northeast, past the Regrowth's flamegate to find Tholo and Anren. Out of combat, the two are circle-strafing, backs together, to keep a look out.

Protect Tholo and Anren from the fire elementals!
Tholo says: Look, Anren! <Name> has come to help us!

Again with the killing. When they get out of combat, they will again resume circling each other and each say a line:

Tholo says: Thank you, <name>. As long as we stay together, Anren and I will be fine. Go check on the others!

Return to the Sanctuary, which is under siege! Hamuul is in bear form. Speak with him.

[85] Guardians of Hyjal: Call of the Ancients &