Celestine of the Harvest

Not to be confused with Matron Celestine.

Celestine of the Harvest is a worgen druid. 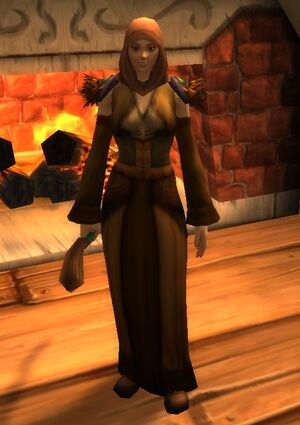 Worgen druid adventurers first meet her in Gilneas City during their starting experience, where she instructs them on how to use the spell

[Rejuvenation]. She was afflicted with the worgen curse and later moves to Stormwind City, residing in a house next to Olivia's Pond. Druid adventurers in Stormwind can visit her to train their skills.

Celestine later helps patrol The Regrowth in Mount Hyjal during the Firelands Invasion.

As of 2011's Hallow's End, Celestine is also a holiday quest giver standing outside the gates of Stormwind. She explains the significance of burning the Wickerman.

When satyr and the Burning Legion attacked Val'sharah's Temple of Elune, Celestine went there and aided in defense. She was then recruited into the Dreamgrove.[1] She worked with Hamuul Runetotem and Zen'tabra to battle Destromath at the nearly-destroyed Well of Eternity on Hyjal.[2]

Celestine participated in the Battle for Darkshore and moved out from her house after the battle, standing next to a tree.

Celestine is one of the primary World quest givers for the Dreamweavers in Val'sharah.

The worgen will pass. We shall pass.

Only the earth and her secrets will remain. Are you willing to learn, <name>?

A beautiful city, is it not? As was Gilneas, in its time.

But such things pass, as shall we. Only the earth and her secrets will remain.

Are you willing to learn, <name>?

You are not initiated in the old ways. There is nothing I can teach you, child.

Welcome to the Wickerman Festival, <class>!

On the observance of Hallow's End, we burn a Wickerman to represent a cleansing of the self. As the woods sigh and shed their leaves, we too must undergo a catharsis. Fears, sorrows, regrets: by throwing a branch into the blaze, you can relieve yourself of any burden you would not bear into winter.

Please, grab a branch from the bonfire and join the celebration!