For more background information on this organization, see The Warcraft Encyclopedia/Cenarion Circle.

The Cenarion Circle (or simply the Circle)[2] is a harmonious order that guides and keeps watch over the world's druids and their practices.[3] The organization mostly consists of druids, with members of the tauren, jungle troll, night elf, and worgen races. It is named after Cenarius.

The Circle has many posts, but their main home is the town of Nighthaven in the Moonglade. Druids learn to teleport to Nighthaven at level 10, but anyone else will have to wait until they can make it to Felwood and find a way through the Timbermaw Hold tunnels. Other alternatives include receiving a summon from a Warlock and two other players, 2-man flying mount, or waiting for the Lunar Festival, which coincides with Chinese New Year, and complete a simple quest from any pre-BC capital to receive the

[Lunar Festival Invitation]. This is a special occasion that should not be missed!

The Circle's other major presence is in Silithus, where they combat the silithid, the qiraji, and the Twilight's Hammer. Cenarion Hold serves as their base in the hostile land, and offers many opportunities to adventurers seeking to aid the druids. They fight the Burning Legion alongside the other class orders during the demons' third invasion.

The Cenarion Circle operates outside of Tyrande Whisperwind's authority.[4] 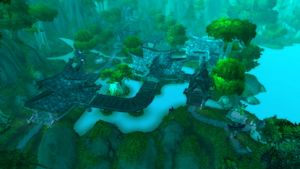 The Cenarion Circle is formed to combat the worgen.

Named in honor of the demigod Cenarius, the Cenarion Circle ensures the protection of nature and its creatures. Furthermore, the members of this faction act as keepers of ancient lore and pay particular attention to the traditional ways of the druids. In their role of protectors of nature, the men and women of the Cenarion Circle also strive to maintain the fragile balance within the world.

The faction was founded by Malfurion Stormrage, named after Cenarius. Initially, the Cenarion Circle was created to combat the growing threat of the worgen.[5] Malfurion trained the first druids to join the group, but soon appealed to Remulos, one of the sons of Cenarius, for help. Remulos played a major role in forming the group and he taught young druids all the secrets they would need to master.[citation needed]

Upon being roused from their sleep, the Druids of the Talon and the Druids of the Claw participated in the defense against the Burning Legion's invasion of Kalimdor. Led by Malfurion, they assisted the Sentinels and tried to find the Wild Gods but were unsuccessful.[6] They ultimately fought in the Battle of Mount Hyjal where they assisted Malfurion with his plan to sacrifice Nordrassil's ancient power in order to defeat the Legion.

With the passing years, the organization grew to include tauren, who shared similar views, as well as members of other races, until it reached its present form. The Cenarion Circle now includes many more members than it did originally, though its total numbers are still few.[citation needed]  Its agents are active throughout Azeroth but are especially present on Kalimdor. Men and women from both the Alliance and the Horde are now welcomed in the Cenarion Circle, but the majority of its members are still night elf men.

The Cenarion Circle is not without conflict. Fandral Staghelm, taking the mantle of archdruid after Malfurion Stormrage entered the Emerald Dream, objected to the introduction of the tauren into the order. He also embarked upon the creation of a new World Tree, Teldrassil, despite the objections of Remulos.[citation needed]

The Cenarion Circle in Darnassus was looking for seasoned adventurers to lend them aid in a vital research project. Arch Druid Staghelm was spearheading this research.[7]

Over the years, many druids of the Circle joined or created various subgroups. After the reopening of the Dark Portal, the Circle sent an expeditionary force called the Cenarion Expedition to Outland. Although it began as a small venture controlled directly by the Cenarion Circle, the Expedition eventually grew into a large and fairly autonomous group,[8] although it still relied on its parent organization's support.[9] After learning of the naga's plans to drain the waters of Zangarmarsh, the Expedition asked for aid from the Circle. Although affairs in Moonglade and Silithus had kept the Circle members occupied, the Circle promised to send the necessary resources to the Expedition's forces.[10]

During the war against the Lich King, the Druids for the Ethical and Humane Treatment of Animals—a radical splinter group of the Cenarion Expedition—appeared in Northrend to make war on the famed hunter Hemet Nesingwary and stop his decimation of wildlife.[11]

After the war against the Lich King, members of the Cenarion Circle partnered with the Argent Crusade to help heal the Plaguelands.[12] When the forces of Ragnaros the Firelord attacked Mount Hyjal, the mountain was defended by an alliance between the Cenarion Circle and the green dragonflight known as the Guardians of Hyjal.[13] Unconcerned with the Guardians' defensive maneuvers, another group called the Avengers of Hyjal was later formed to end the threat of the Firelord once and for all by invading Ragnaros' own realm, the Firelands.[14]

The tauren druid Galena Stormspear, accompanied by the blue drake Telagos, reported the events of the battle at the Hidden citadel in Outland to the Cenarion Circle in the Moonglade. The druids were impressed that Galena had convinced Telagos to meet with them. The drake spent several days studying the druids, and the druids studied him.[15]

The Cenarion Circle moves the bulk of its forces to the Dreamgrove in Val'sharah, the ancient forest where Malfurion first learned druidism under the tutelage of Cenarius. There they battle the forces of the Burning Legion across the Broken Isles, but most predominately Xavius and the Emerald Nightmare.

The Cenarion Circle lost nearly all its members in Silithus with the destruction of Cenarion Hold. Malfurion Stormrage sent more members of the Circle there and, with the Sisters of Elune, the druids planned to build moonwells in an attempt to heal and stabilize Azeroth's wound. Hamuul Runetotem voiced his hopes of building a new Hold in the region as well as renewing cooperation with the Alliance through the Circle, but the Warchief Sylvanas Windrunner was much less receptive to his suggestions.[16]

The Cenarion Circle joined the Earthen Ring and Magni Bronzebeard in Silithus to help heal the wound left by Sargeras, but initially their efforts seemed to be having little effect.[17]

The Circle's main concern is currently combating the threat of the Silithid and Qiraji. From the official World of Warcraft Cenarion Circle Reputation page:

War is brewing in the distant lands of Silithus. All over the world, men and women are gearing up for one final push into the heart of the Qiraji empire to end the threat which has been lying in wait, barely contained behind the barrier erected by the Night Elven druids and the mighty dragon Anachronos during the climactic battle at the end of the War of the Shifting Sands. Ever since that fateful day, the members of the Cenarion Circle have kept a close watch on the wastes from their base at Cenarion Hold at the center of northern Silithus. There, the Night Elven and Tauren disciples of the magnificent demigod Cenarius have been waiting for the time when a hero would step forward to unleash the might of all the mortal races against the sinister Qiraji and their innumerable legions of Silithid minions. But the druids have not been idle during their long watch; they have crafted formidable weapons, armors and enchanted ornaments to assist all those who will brave the terrors of Ahn'Qiraj. Adventurers who have proven their worth in battle against the Qiraji forces beyond the Scarab Wall will be granted access to the ancient order's arsenal.

At last, the long watch has ended - the hero has risen, to mend that which was broken, to unite those who were divided. But the true test is yet to come. When the gates of Ahn'Qiraj open, will the mortal races stand united once again and face the onrushing terror, or will they fade silently into the darkness that has risen once again in the distant lands of Silithus?

Members of the Cenarion Circle offer a large numbers of quests in the game. Moonglade includes three questlines for druids at level 10, 14 and 16, as well as higher level quests for all characters in Dire Maul and Silithus. Cenarion Hold and Valor's Rest serve as the quest hub for Silithus and both wings of Ahn'Qiraj. Additionally, representatives of the Circle in Desolace offer quests for Maraudon.

Upon the reopening of the Dark Portal to Outland, the Cenarion Circle dispatched an expeditionary force - joint night elf/tauren, much like the Circle itself - to explore the uncharted new world. Over time the Cenarion explorers grew more autonomous and became their own faction within Outland, separate and yet connected to the Cenarion Circle. This faction is known as the Cenarion Expedition, which awards its own reputation apart from that granted by the Circle.

This section contains information that needs to be cleaned up. Reason: Rewards not showing properly.

When the Gates of Ahn'Qiraj open on your server, new NPCs give quests for class-specific weapons and armor. These include both Ruins of Ahn'Qiraj Quest Loot and rewards from the Field Duty quest lines.

There is no one faction quartermaster for the Cenarion Circle. Instead, there are vendors focused on various professions:

Additionally, inside the Ruins of Ahn'Qiraj, if Andorov survives the event, he also sells a few limited-quantity recipes:

Its members are dedicated to protecting nature and restoring the damage done to it by malevolent forces.[21]

Most of this faction's members are either night elves or tauren. The Cenarion Circle, however, accepts men and women of any race; druids are members by definition, but other characters must prove themselves to the Cenarion Circle before to become accepted. Fervently dedicated to protecting the wilderness, the operatives of the Cenarion Circle consider their duties above the petty wars and futile disputes of the Alliance, the Horde, and any other faction, race, family or group. They are, after all, trying to save the world from those who would unwittingly destroy it; they allow no distractions.[21]