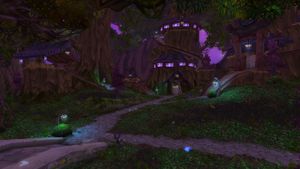 The Cenarion Enclave is a major district and a grove[1] in the night elven capital of Darnassus, where the city's druids reside and meet.[2] Archdruid Fandral Staghelm formerly led his followers and kin from the boughs of the Enclave, until Malfurion Stormrage returned from the Emerald Dream during the War Against the Nightmare. The area remains a hub for druid trainers.

Below-ground, a secretive rogue guild can be found if one knows where to look within the westernmost bough. Darnassus's hunters also come to the Cenarion Enclave to train in the easternmost tree, while the skill and means to ride nightsabers can also be obtained at the foot of the Enclave tree.

The Cenarion Enclave is located in the northwest of the city, accessible from the Temple Gardens to the south, Craftsmen's Terrace to the east, and the Howling Oak to the north. Tall trees — oaks and ashes especially — lined the enclave. Each tree bore mystic runes shaped from the very bark. Within the circular grove, a handful of unique structures molded both from living wood and carefully-shaped stones represent the usual gathering place for convocations. The largest of these structures served as the residence of Fandral Staghelm.[3]

Just as the Temple of the Moon serves as the center of priestly activity in the city, so too has the Cenarion Enclave traditionally housed Darnassus's druids. This sect was initially led by Archdruid Fandral Staghelm, who himself resided in this portion of the city. Since then Malfurion Stormrage returned to and once more took up the role of druidic leadership, though he can be found in the Temple of the Moon with his wife Tyrande Whisperwind rather than in the Cenarion Enclave.

Shortly before the War Against the Nightmare, Broll Bearmantle secretly arrived here and stole the Idol of Remulos.[4] Later, Fandral Staghelm with the Nightmare power defeated Shandris Feathermoon, Hamuul Runetotem, and Naralex and imprisoned them here. Not soon after, Malfurion Stormrage arrived here to confront Fandral, finding and releasing the prisoners through a spell. Joined by other druids, Malfurion defeated a shadow that impersonated Fandral's long-dead son Valstann. That sent Fandral into a state of shock. Fandral's sanctum was ruined but Malfurion sensed something casted a spell and reshaped the sanctum revealing a portal to the Emerald Dream, secretly created by Fandral. Now, Alexstrasza resolved to defend it while Malfurion went to form a plan against the Emerald Nightmare. He entered a trance and gathered an army from various parts of Azeroth. When he was done and the army moved to the Dream, suddenly, Keeper Remulos teleported here and urged Malfurion to follow him into a certain location in the Nightmare. Broll and Hamuul remained in the Enclave coordinate the events and watch over the druid bodies.[5]

After the Cataclysm, Morthis Whisperwing was sent to scout the disastrous event and when he returned he met with Malfurion in the Enclave.[6]

At the time of the campaign in Pandaria, the Alliance managed to recover an ancient, powerful, and dangerous mogu artifact known as the Divine Bell from the continent. The Bell was subsequently taken to Darnassus for safe keeping, and was kept underground beneath the Cenarion Enclave. With the aid of Aethas Sunreaver, the Horde would mount an infiltration of the city, and successfully steal the Bell from its vault.[7] The repercussions of this event would eventually culminate in the infamous Purge of Dalaran.