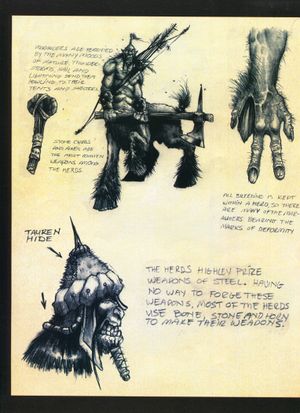 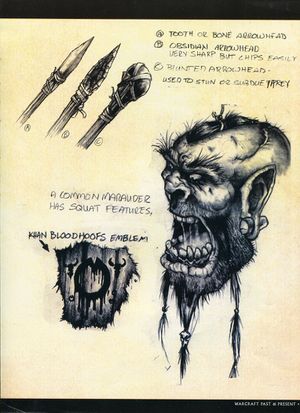 The Centaur Marauders were a centaur group found within the Barrens. They are the ancestral enemies of the tauren, and were immediately hostile to the orcs upon discovering them. The Marauders launched an assault on the Bloodhoof tauren but were beaten back due to the tauren receiving aid from the Horde.[1] The marauders later attempted to prevent the tauren from migrating to Mulgore but the combined tauren, orc, and troll forces were able to hold them back.[2] The current status of the centaur marauders is unknown.

Their Khan is named Khan Bloodhoof.[3]

Centaur Marauders are terrified by the many moods of nature. Thunderstorms, hail, and lightning send them howling to their tents and shelters.

All breeding is kept within a herd, so there are many of the marauders bearing the marks of deformity. A common marauder has squat features.

The herds highly prize weapons of steel. Having no way to forge these weapons, most of the herd use bone, stone and horn to make their weapons. These include tooth or bone arrowheads, obsidian arrowheads (very sharp but chips easily), and blunted arrowheads (used to stun or subdue prey). Stone clubs and axes are the most common weapons among the herds.

They make their clothing out of tauren hide.[3]