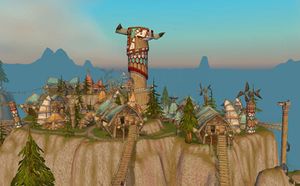 Four large mesas, or "rises" host Thunder Bluff's various sections. The central mesa (or the center rise)[1] is the largest, with three separate levels accessed by an enormous, encosed staircase. The other three mesas link to the central mesa via rope bridges. The top of the central mesa, also called the High Rise, contains the High Chieftain's home.[2]

On Central Rise one may find the inn, bank, flight tower and court of Baine Bloodhoof. As such, this rise also serves as the center of commerce for Thunder Bluff, and perhaps the most important section for visitors.[3]