This article is about the Bastion race. For the achievements and titles, see 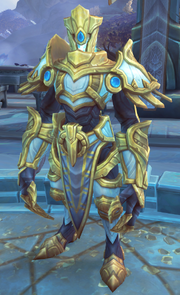 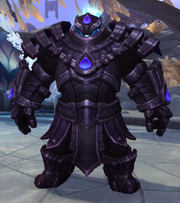 Centurions are anima-fueled automatons found in Bastion. They are built by the stewards and are responsible for training Kyrian Aspirants as well as defending Bastion. They come in several different types. One of which are Mnemis units, a classification that curate a wealth of knowledge on behalf of the archives.[2]

[Phaestus, Genesis of Aeons] to create a centurion army of his own.[4]

Our automatons train the faithful. But the mightiest among those guardians is a blade best left in its scabbard. The colossi are our eternal protectors, called upon only in dire need.[5]

These flying automatons are charged with training Aspirants who show particular martial promise.[1]

Unyielding bulwarks and powerful warriors that enforce order in Bastion.[1]

Eternal protectors, these guardians have stood watch and defended Bastion for ages.[1]