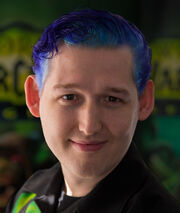 Chadd Nervig, also known as Celestalon,[1] was a Technical Class/Systems Designer for World of Warcraft.[2] He was the designer of the Endless Halls,[3] and played an important part in the design of artifact weapons. He was also involved in design work on Hearthstone.[4][5]

[Celestial Dragon] as his avatar on Twitter and the official forums.

Celestalon at the Champagne Toast for Hearthstone

Celestalon started posting on Twitter on November 19, 2013.[6] He left the World of Warcraft team to join the Hearthstone team on December 8th 2017.[7]