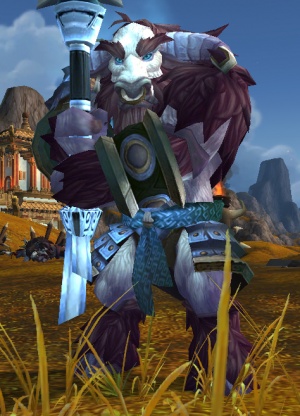 Set the Yaungol Banner ablaze to summon and defeat Ur-Bataar.

The deeply resonant howl of challenge issues forth from a place to the southwest known as the Yaungol Tug. This is where the yaungol have laid their claim upon Kun-Lai Summit as is their tradition.

You know that if you do not go there and defeat their champion, the Horde will not be able to hold Easterly Rest for long.

You did it! At the very least, we have justice, and safety, though in the process we have lost so much.

Regardless, it has been decided. We will join the Horde, and with your help, rebuild this village.

Head due east from the quest giver to reach Fire Camp Bataar. The banner is on the north side of the encampment. Kill all of the Bataari Banner Guards before interacting with the banner, as they will all aggro if they're not dead. Set it ablaze and Ur-Bataar will jump in from the southwest:

Ur-Bataar yells: Fool! I will crush you!

Head back to Eastwind, which is still ablaze.

On complete, a cutscene:

The pandaren run in and start putting out fires. Shortly after, General Nazgrim runs in with the rest of the Horde forces, plants a banner, and sets up camp.
General Nazgrim says: Good work, friend. Speak with Kiryn and Rivett while I assess our new surroundings.

[87] Deanimate the Reanimated from Kiryn,

[87] Trouble on the Farmstead from Farmer Ko.

This completes the "Eastwind Rest" portion of