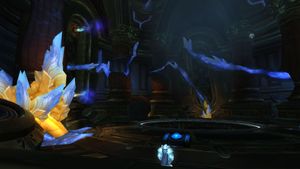 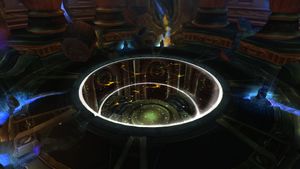 The cracked seal and Azerite spikes

The Chamber of Heart (or Chamber of the Heart)[1] is an ancient titan vault found far below Silithus.[1] It is accessed via a Titan Translocator near Magni's Encampment in Silithus. Like the Hall of Communion, it is possible here to communicate with Azeroth, the world-soul of the planet. The facility contains defense nodes and a seal on the chamber protects Azeroth's world-soul.[2]

The Chamber of Heart was created by Archaedas. Knowledge of its existence was heavily restricted to protect the world-soul; it was unknown even to Highkeeper Ra.[3]

Following the Wounding of the planet by Sargeras, Magni brought a hero to the Chamber at Azeroth's request. He found it in ruins, with immense veins of Azerite having breached through the vault's walls, even impaling the Maiden of Vitality. Magni was afraid that the facility wouldn't hold together for long, especially with the chamber's seal being close to shattering because of the Azerite bursting through.[2] There, Azeroth bestowed the

[Heart of Azeroth] onto the hero, a powerful artifact than can absorb Azerite and use it to heal the world-soul's wounds.[1] The champion used it to draw in the Azerite around the chamber, then unleashed the amulet's power to mend the crack in the center of the seal. With the chamber repaired and the world-soul secure,[2] the elementals on the surface calmed down, and Magni could hear Azeroth again, although her voice was still weak.[4]

The Chamber was eventually entered by an unknown Void being. 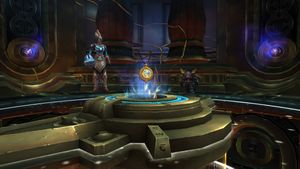 Heart Forge with the

MOTHER, Ebyssian, Kalecgos, Chromie, Merithra of the Dream, and Alexstrasza are eventually invited to the Chamber.

After the Heart of Azeroth reaches level 70