Chamber of the Moon

For subzone of Uldum, see Chamber of the Moon (Uldum). 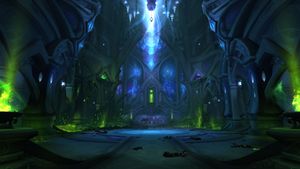 Chamber of the Moon.

The Chamber of the Moon is the official name of the center section of the Temple of Elune, now known as the Tomb of Sargeras. Many great rituals took place here, and when it was not in use by the high priestess the temple encouraged everyone to make use of its tranquil environment.[1]

During the War of the Ancients, Malfurion Stormrage used this chamber to meditate and enter the Emerald Dream, before adventuring to Zin-Azshari in spirit form in order to learn more about the carnage of the capital city and to try to undo the Highborne's spellwork.[2]

The room is now filled with the bodies of the demons killed by Legionfall soldiers during the assault on the Cathedral of Eternal Night. The fallen pit lord Goroth is encountered here, having been ordered to halt the progress of the Armies of Legionfall; his fiery arrival opens the Collapse leading to the Lair of Harjatan in the caverns below.

A set of stained glass windows at the back of the chamber depicts night elves wielding the Pillars of Creation. Below is a dais displaying holograms of the Pillars installed throughout the Tomb, and a doorway leading to the Conclave of Torment. Once all four Pillars are installed, a stairway opens to The Guardian's Sanctum.

Goroth defeated
Illidan Stormrage says: The echo of the Guardian Aegwynn appears, just as she did in the cathedral.
Image of Aegwynn says: I sealed each level of this temple so that no invader could descend into its depths. I never anticipated that the Legion would find another way to breach its dark heart.
Image of Aegwynn says: My protective wards now bar your way. Each seal can only be opened with one of the Pillars of Creation. Be warned: the demons will stop at nothing to prevent your advance.
Image of Aegwynn says: I can sense one of the Legion's masters working to reanimate the Avatar of Sargeras. Should Kil'jaeden infuse that husk with the Dark Titan's power, I do not know whether any force on this world can stop it.
Archmage Khadgar says: Then we have no time to lose.
Archmage Khadgar says: Heroes, the paths are open. Use the Pillars of Creation to bypass Aegwynn's wards before the Legion claims the avatar.

After placing the Pillars of Creation
Image of Aegwynn says: The elves built this temple upon a site of ancient power, a vault I believed would safeguard the husk of my fallen foe. But with his disciple's aid, the Dark Titan threatens to return to this world stronger than before!
Archmage Khadgar says: We will put a stop to Kil'jaeden's plan, Aegwynn. This time we will not fail.
Illidan Stormrage says: Bold words, Khadgar, but victory requires more than courage alone. The armies of your Alliance and Horde had courage... before facing slaughter on the Broken Shore. The Deceiver will turn your fears and doubts against you.
Prophet Velen says: Kil'jaeden hounded my people across the stars, but we are done running. He will pay for his atrocities against our world... and my son.
Archmage Khadgar says: You're right, Illidan. Kil'jaeden and the Legion have defeated each of us in the past. But if we stand together, Azeroth can yet be saved. I know it!