Champion Vranesh is a blood elven Blood Knight champion seen standing in the Hall of Blood and patrolling the streets between Farstriders' Square and The Royal Exchange. He stops in front of numerous Silvermoon City Guardians who kneel before him, and an emote text appears where he seems to look at the guards disapprovingly, probably hinting at a political division in Silvermoon.

Vranesh was an early member of the Blood Knight order. Though a highly skilled fighter, his arrogance and aloofness often put him at odds with his comrades. Lady Liadrin saw it as a symptom of the group's lack of unity, and aimed to instill a tighter camaraderie between the knights. Vranesh took part in the reclamation of Sunsail Anchorage and maintained a vigil at Dawnstar Spire. Vranesh later informed Liadrin of Galell's disappearance and confided that many suspected him to be the murderer of Orovinn.

Vranesh identified the presence of a hooded and cloaked individual moving to and from the spire, though learned too late that it was a risen Dar'Khan Drathir, who had lured the knights into the open to kill and raise them into undeath. Vranesh fought off the undead and turned the battle around on his opponents, and was the first to heal Lor'themar Theron when the regent lord was engulfed in Drathir's flames.[1]

Following the death of Tirion Fordring, Vranesh joined the Silver Hand and is located in the Sanctum of Light.

He later traveled to the Broken Shore to support the Armies of Legionfall at Deliverance Point. 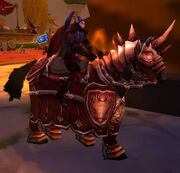 Just before taking off to patrol the Royal Exchange, Vranesh walks up to Champion Bachi and bows before him. He then leaves the building and mounts up.

Champion Vranesh inclines his head slightly to the pair of guardians in greeting.

Upon arriving at the guards in front of the bank:

Champion Vranesh arches a sculpted brow at the guards, a disapproving scowl on his face.

Upon arriving at the guards in front of the jewelcrafters:

The guards will respond with some of the following after each of his emotes: