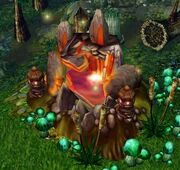 The Chaos Well, a corrupted Fountain of Life.

The Chaos Well was a corrupted fountain created by Mannoroth in Ashenvale when the Burning Legion reached Kalimdor. On Tichondrius' suggestion to use the orcs once more to defeat Cenarius, Mannoroth spilled his burning blood into a Fountain of Life, corrupting it, and causing anyone who drinks of it to be infused with the Blood of Mannoroth.[1] When Cenarius attacked the orcs, Grom Hellscream took a detachment to explore the forest. Grom and his band found the Chaos Well and intentionally drank from it to empower themselves against the forest lord, becoming chaos orcs. This however renewed the blood pact with Mannoroth. The orcs proceeded to use their newfound power to kill Cenarius and the night elves that were defending him.[2]