Chaos orcs are orcs that drank from Mannoroth's Chaos Well in Ashenvale Forest and became corrupted.They were orcs of the Warsong clan that followed Grom Hellscream's decision to drink from the well to gain power in order to defeat Cenarius and his forces (Shadowleaves, Moonhunters, and Nightblades). By drinking from the well, they were further corrupted with more of Mannoroth's blood, turning red and growing larger.[1] 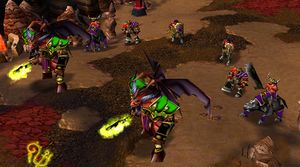 Chaos orcs, also known as fel orcs, are the creation of Mannoroth, who "blessed" the orc race by infusing within them fel energies and binding their will to the Burning Legion. While Grom's sacrifice freed most of his race, many orcs remain loyal to Mannoroth and worship the demons, gaining tremendous strength in exchange for their service. While not all demon-worshiping orcs are fel orcs, more than enough still partake of demon blood for the strength it grants them.[3]

There could be some level of distinction between chaos orcs and fel orcs. The Monster Guide says that fel orcs are also known as chaos orcs[4] (and thus are not separate), however, this source is non-canon. It's also not known if the Slave Master and Jubei'Thos who appeared in Reign of Chaos campaigns in Lordaeron can be considered chaos orcs, fel orcs or something different. All the Warcraft III icons for red skin orcs have the word Chaos in their file name, and the World editor sound set for Slave Master is "ChaosWarlord".

It's possible that with continued exposure to the corruption from Mannoroth's blood they may have mutated into the more physically demonic fel orcs. However, both are created from Pit Lord blood and there may be 'intermediate' fel orc stages that chaos orcs may be a part of.

There is also a chance that the difference is related to the possibility that "fel orcs" as we know them were not conceived by Blizzard until The Frozen Throne. The use of the term "Chaos" seemed to be replaced with its synonym of "Fel", possibly to avoid a direct reference to the IPs of Games Workshop, like the changes to dwarven vehicles. 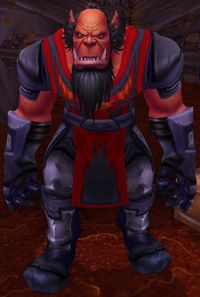 Quartermaster Dekrok, may be a chaos orc, a fel orc or something different.

Red skinned orcs appear as one of the random Horde Portal-Sentries that are guarding the Dark Portal for the Horde along with the Alliance. The general goods vendor, Quartermaster Dekrok, also has a red-skinned orc model. They may be chaos orcs, or they may be fel orcs. Also, they might be another color of Mag'har, or this may be a simple skin error.