Chapel of the Crimson Flame 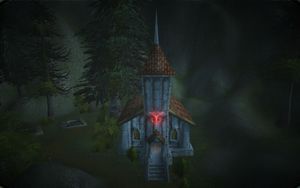 Chapel of the Crimson Flame

During the Second Phase of the Scarlet Enclave, the chapel has been captured and is being burned by death knights with torches. Knight Commander Plaguefist can be found leading the Death knights. Near the Chapel is a small hut where the Scarlet Crusade had been holding Argent Dawn prisoners. The Death Knight is sent inside during a quest to slay a certain prisoner. The prisoner who they slay is dependant on the Death Knight's race.

Outside of the Death Knight starting area the chapel has been destroyed along with the hut and is abandoned, as with the rest of New Avalon.

The chapel is involved in the following quests: