For the interface that displays your character's stats and equipment, see character info.

At the Character Selection screen, you can make a new character, choose a character to play, change your current realm, access tech support, and adjust your account settings.

Clicking the Create New Character button takes you to the character creation screen, where you can generate a character to play in the game.

Each character entry shows the character's name, level, current location, and rest state. Clicking on a character displays it in the center of your screen.

To delete a character, select that character and then press the Delete Character button. You will be prompted to confirm the deletion. Click the Okay button to permanently erase that character.

Realms are discrete game worlds. You can interact with all the players in your realm, but originally not with players in other realms, this was changed with cross-realm technology released with the pre-expansion patch for Mists of Pandaria. When you first play World of Warcraft, your realm will be pre-selected for you.

If you wish to play in a different realm, press the Change Realm button. A list appears showing all available realms and the current number of players in each realm. Click on the realm you want to join, and press the Okay button.[1][2] 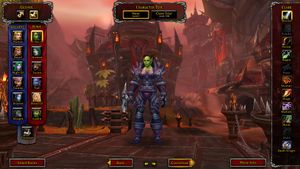 The character creation screen allows the player to choose a race, gender, and class for their new character. Note that these choices are essentially permanent, and once the character is created cannot be changed in-game. A character's race and gender can be changed through paid services outside the game itself, namely the Race Change and Appearance Change, respectively, but it is not possible to change an existing character's class by any means.

Once the race, class, and gender are chosen, the player can then customize several aspects of their character's appearance, including their face, hair, skin color and race-specific options such as horns, tusks, and tentacles. Each of these features can be adjusted individually, or the player can try random combinations through the Randomize button. All of these features can later be changed by visiting a barbershop in-game or through the paid Appearance Change service.

Finally, the player must choose a name for their character. The Randomize button can be used to generate random names, in keeping with the race and gender chosen. The choice of the name is permanent unless the paid Name Change service is used.

On public test realms and during beta testing, players may be able to create template characters through a special button from the character selection screen.

Characters can be deleted from the character selection screen, with the player required to manually type "DELETE" in order to confirm the action. Once deleted, the character will no longer be shown or be available for play.

Character deletion is permanent, and deleting a character will cause all gear and items to be lost. However, the Undelete Character feature can allow players to restore certain deleted characters.

Coming with patch 6.0.2, the Restore Deleted Character option allows the player to restore deleted characters, with a few limitations.[3]

Whether a character is available for undeletion depends on its level and the amount of time that has elapsed since it was deleted.

The following text is from the Worldofwarcraft.com Changing Realms/Character Move page (part of "Account Management"):

"Below you will see a listing of all characters associated with your account, across all realms. If one or more of your characters are eligible to move, this page will allow you to move those characters to a predetermined low population realm. Please note that only characters on high population realms are eligible for transfer. To see what realms are currently high population, check the Realm Status page. Also note that you will not be able to explicitly choose which realm you'd like to move to. Instead, the new realm is determined automatically and displayed in the "Destination Realm" column below. For answers to common questions, please check out our Character Move F.A.Q."

Blizzard may, in its sole and absolute discretion, offer certain users the opportunity to move characters from a heavily populated "Character Migration" server to a server designated by Blizzard as a "Target Server." If you are offered the opportunity to migrate a character, please note the following:

If a character of the same name already exists on the Target Server, you will be given an opportunity to rename character as part of the Character Migration process. As always, the name must adhere to the naming conventions stated herein.