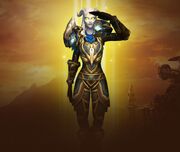 Opposing the Iron Horde are the heroes of Azeroth—at the heights of power they've always been destined for. Even if you're new or returning to the game, Warlords empowers you to boost one of your characters to level 90 and master new abilities at the gateway to Draenor, so that you can charge into grand combat right away. Play the races and classes you've always wanted to try, wage war alongside your friends, and take your place among Warcraft's finest.[1]

The Character Boost (or simply boost) is a paid service that allows any character to be upgraded to a higher level that isn't already on the specified level. Purchasing an expansion grants a single character boost during the time of that expansion:

The Character Boost can be purchased through the in-game shop, currently priced at $60/£40.

There comes a time in every hero's quest when they need a little boost to help get them over the hump and back into the action. With a level 110 character boost, you can grant one character a one-time boost to level 110 instantly.

*Boosting an Allied Race will not unlock their heritage armor set.

Since the release of patch 8.0.1, players who bought a boost before July 19, 2018, but didn't use it til after July 16, 2018, are eligible for a refund through August 12, 2018, due to the removal of the profession boost for characters at or above level 60 that had their existing primary professions and First Aid skill boosted to 800 skill level.[4] 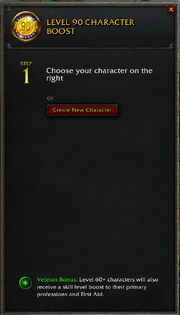 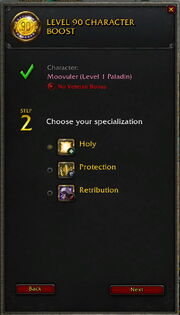 Step 2
(Paladin specializations in this instance)

A level icon for the Character Boost will appear on your character selection screen next to the server name once you have the ability to boost a character. Clicking on this will open the two step process to boosting your character to the given level.

Clicking "Level Up!" Gives you one final "Are you sure?" message in the center of the screen before the boost is used.

After Patch 6.0.2, but before the release of Warlords of Draenor, boosted characters had to unlock their abilities through the Iron Horde Incursion world event in the Blasted Lands. With the release of Warlords, boosted characters instead acquire their abilities through the Warlords of Draenor intro experience.[6]

The Character Boost, What's New screen during Warlords of Draenor.

When a character is boosted to level 90 or level 100, all gear slots are emptied and filled with new specialization-appropriate ilevel 483 (or ilevel 640 for level 100) uncommon-quality gear. The previous gear is mailed to the character. These mailed items may include Timeless items that were earlier mailed to the character by other characters on the same account. The boosted character can immediately turn these into epic quality gear, increasing that character's item level even more.

Q: How does boosting a character work?

When you pre-purchase the expansion* or purchase a standalone character boost from within the game, a Character Boost token will appear on the character-select screen in World of Warcraft. Once you purchase it through either method, you can click the token to apply your boost at any time—no need to use it right away if you’re not ready. Keep in mind that character boosts are irreversible, so it’s a good idea to make sure you’re boosting the character you really want to.

If you boost a level-60 or higher character, you’ll also get an extra bonus: both of your Primary Professions will be bumped up to 600, so you’ll be an instant pro at your chosen callings. If you’re boosting an existing character and want to change professions, just make sure you train the professions you want before you apply the boost. Also, if you’re not quite level 60 yet (but thiiiiiiis close), you might want to consider holding on to your boost token until you earn those last couple of levels—your boost will still be waiting for you when you’re ready.

Check out the Character Boost web page, watch our video guide, or read the support article for lots more information.

Q: What do I get with my character boost?

When you boost a character to level 90, whether it’s a newly created level-1 character or an existing character with some experience under their belt, you’ll receive the following:

Q: Can I apply my character boost to any character on any World of Warcraft account?

That depends! If you pre-purchase the expansion, the Character Boost token will only appear when you’re logged in to the WoW account you upgraded to Warlords of Draenor. If you purchase a standalone character boost, you’ll be able to use it on any eligible World of Warcraft account on your Battle.net account.

Note that if you’re upgrading to Warlords of Draenor directly from the World of Warcraft Starter Edition, it may take up to 72 hours for you to receive your character boost.

Q: Can I get a character boost immediately if I decide to pre-order a physical standard or Collector’s Edition from a retailer?

Players who purchase the normal physical standard edition or physical Collector’s Edition from a retail store will get their character boost when they receive their copies at the launch of the expansion.

Players who purchase the retail version of World of Warcraft: Warlords of Draenor - Pre-Purchase Version with the red banner "Pre-Purchase to get Instant Level 90 Character Boost" will get the character boost as soon as they enter the code included in the box into the Account Page. The upgrade can also be bought digitally from the Battle.net Shop using a range of payment methods (including Battle.net Balance gift cards).

*Players upgrading to Warlords of Draenor from World of Warcraft Starter Edition must wait until trial restrictions are removed before character boost becomes available (may take up to 72 hours).