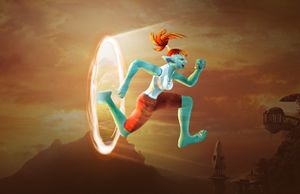 A Character Transfer, previously Paid Character Transfer Service (PCT), is a paid service that allows the user to move characters to other realms, between two World of Warcraft accounts or from one Blizzard account to another. The cost of each paid character transfer is $25 / 20€ / £15 / ₩24,000.

Initially, there was a 6-month cooldown between character transfers. The cooldown was reduced to 1 month in late February 2008 and later reduced to 3 days in July 2009.

This service can take up to 72 hours to complete. If you log in before the transfer is complete, it may fail and the character will be locked.

In addition to the above realm limitations:

In addition to the above realm limitations: Note: These apply even if you stay on the same Blizzard account.