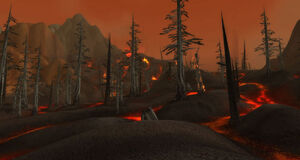 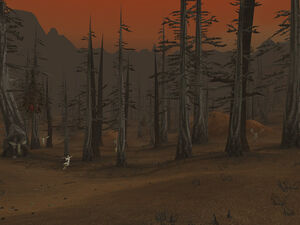 The Charred Vale before the Cataclysm.

The Charred Vale is a large valley once a verdant place[1] but now lies mostly in flames and lava in the southwest section of the Stonetalon Mountains. The exact name of the place prior to being charred is unknown, but it was here that Bloodfury harpies called their home and treants roamed the area to protect their forest. The goblins of the Venture Company decimated the vale and enraged its spirits and released numerous elementals[2] when the vale's guardians, the treants, drove the goblins back. As they left, the treants were probably corrupted by goblin's weapons.[3]

Thanks to the efforts of the adventurers and the druids of Sun Rock Retreat, the forest had started to regrow once more, hoping it would again become a beautiful green forest.[4] However, after Cataclysm, a nearby dormant volcano erupted, spewing out lava into the vale where it destroyed half the area and opened a path to the Veiled Sea. Since most of the harpy population was on the western part of this vale, they were likely killed off, except for those that managed to escape in time. The only known survivor known is Sister Riven.

In the destruction's wake are Black Dragon Whelps, Fissure-born Fire Elementals and Black Drakes under the leadership of Seldarria. 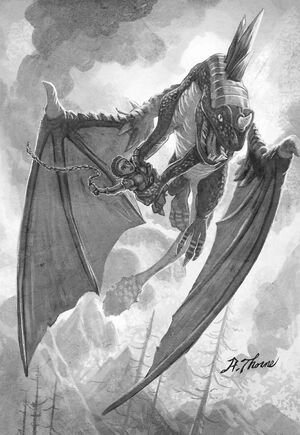 Makasa and a black drake.

Recently, the Charred Vale is the chosen location of one of the Mechanical Engineers' Guild of Azeroth's main events, attracting hundreds of spectators, even Gazlowe.[5] Gazlowe and his crew took Aramar Thorne and his friends to the Cloudkicker and flew them from Tanaris to the Charred Vale. After saying goodbye, the engineer left them in the Vale and the goblins continued to the MEGA event's location. The children continued north through the smoldering vale for seven hours, and Taryndrella tried to heal a withered tree, but she was too young to be successful. Dodging dragon nests, they were eventually surrounded by black drakes and whelps. A drake took hold of Makasa Flintwill until it was defeated by the Sentinels from Thal'darah Overlook while the other dragonkin fled.[6]

The Charred Vale was once a tranquil and verdant section of forest, but in recent times a number of fire and earth elementals appeared here, burning and blasting the ancient trees. To complicate matters further, harpies not only maintain a presence here but seem to flourish. Corrupted treants also wander the vale, along with basilisks and even a few chimeras. It is possible that the corruption of the vale is caused by the demons found to the south in Desolace.[7]

The road to Desolace leads through this vale, and thus it is suggested that inexperienced adventurers invest in a flying mount to travel over this region rather than walking through it on foot.[7] The denizens of Sun Rock Retreat are concerned with discovering why elementals spring from beneath the earth in this vale.[7] It is perhaps due to the ley lines that cross under Mirkfallon Lake that the elementals are drawn to the area around the Charred Vale.[8]

An in-game sign pointing towards the Charred Vale has a plank over, suggesting the area was renamed after deforestation. However, there is nothing in the lore that provides us with what it was once named. Due to the harpies living here, its original name could have been the Valley of the Bloodfuries.