From Wowpedia
(Redirected from Chasing Visions)
Jump to: navigation, search

Chasing Visions is chapter one (1) of the prologue campaign, Exodus of the Horde, in Warcraft III: Reign of Chaos. 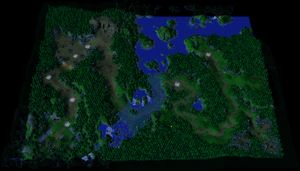 Somewhere in the Arathi Highlands, Thrall, the young warchief of the orcish Horde, wakes from his troubling dream.

Thrall: What kind of nightmare was that?
The Prophet flies overhead in the form of a raven.

The Prophet: It was not a nightmare, young warchief, but a vision. Follow me, and I will reveal what your future holds.
The Prophet flies off.

Thrall: I don't know what this is all about, but I'll play along.

Grunt: We are yours to command, Warchief!

Thrall meets the Prophet on a cliff overlooking the ocean.

The Prophet: Greetings, son of Durotan. I knew you'd find your way.

Thrall: It was you I saw in the vision. Who are you? How do you know me?

The Prophet: I know many things, young warchief, about you and your people. My identity, at this time, is unimportant. What is important is that you rally your people and leave these shores immediately.

Thrall: Leave? What's this all about, human?

The Prophet: Human? I left my humanity behind long ago. I am something... different now. Know that I have seen the future and beheld the great burning shadow that is coming to consume this world. You sense it as well, don't you?

Thrall: The demons... are returning.

The Prophet: Yes. And only by leading your people across the sea, to the distant lands of Kalimdor, will you have a chance to stand against them!

Thrall: But how can we--

The Prophet: I will answer all of your questions in time, young warchief. For now, rally your warriors and prepare to leave this land. We will speak again.
The Prophet turns into a raven and flies off.

Thrall: None of this makes sense, but the spirits tell me... that I should trust him.

Thrall awakens after his strange vision/nightmare and gets out of his tent, where he finds a mysterious raven which tells him to follow it so that it can reveal what Thrall's future holds. Thrall amazed by this scene decides to play along and follow the creature. Thrall sets out to find the raven, but first gathers three of his grunts from the encampment due north of his tent. While following the mysterious raven, Thrall and his grunts find a gnoll encampment, which is in the middle of their path, so they destroy the encampment and continue following the raven's path. While crossing a river, they encounter a group of murlocs who are settling in the river and later on also find a sleeping ogre, both of which they slaughter. While exploring the vicinity of the path which the raven takes, Thrall and his comrades encounter a group of golems, which they kill and steal the treasure they were guarding, and a group of forest trolls, which while killing them, Thrall exclaims that he couldn't believe that these creatures used to be part of the Horde during the Second War. Thrall finally reach the location where the raven led him to. The raven transforms into the Prophet of Thrall's vision. The Prophet tells Thrall that the Burning Legion is going to return and that he has to travel west to Kalimdor and settle there to be safe. Thrall, not being sure about what to do, asked the spirits to guide him, in which they responded by telling him that he can trust the Prophet.[3]