Chasing the Moonstone is part of the druid's Swift Flight Form quest chain.

If the essences are combined within a rare gemstone such as a Southfury moonstone, you'll be able to release them when you're prepared to challenge Anzu.

The only problem is that Southfury moonstones are only found on the Azshara side of the river, on the cliffs near the river's source.

Tragedy befell the last night elf party that sought the stone. Their boat is still anchored in the river near where they sighted the moonstone. Keep your eyes open and approach the site by land from the Azshara side.

You look like you've been through quite an ordeal. Was the moonstone really that hard to find?

<Morthis seems torn, at once desiring to laugh at your story, and mindful of how close you came to losing the moonstone. He settles for staring at the glowing stone.>

I'll get to work on infusing it with the bird spirit essences. Soon, you'll be prepared to challenge our enemy. 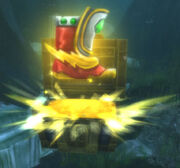