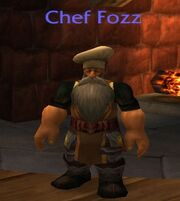 Chef is a title awarded when you complete the achievement

Hail to the Chef from completing several other cooking achievements.

The title appears before your character's name:

The required achievements are:

Notably not required is

As of Patch 3.0.3, the final level of The Northrend Gourmet currently requires more recipes than are currently available in the game.

There are four recipes that were found using data mining websites, or existed in beta, that did not make it to release. The missing recipes are:

Blizzard has acknowledged the issue.

We are aware of this and plan to make some changes to this in a future patch.

See the undocumented changes for Patch 3.0.8 for the resolution.