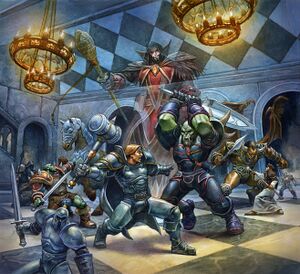 The Karazhan Chess event as seen in an official artpiece

The Chess Event in Karazhan must be solved in order to reach Prince Malchezaar. The raid plays a sort of chess match against Medivh.

Although the analogy to chess is usable (Daemons are "stronger" than Footmen for example), it's not very strict. The pieces from the event behave very differently from real chess pieces, in particular the pieces autoattack enemy pieces they face, automatically cast their spells (but do not move) when not controlled by a player, and the Kings are actually the strongest pieces in the game. In order to start the event, a player has to take control of the King piece of their own faction. The objective is to kill the enemy King without losing one's own King. If the game is won, a Dust Covered Chest appears with loot. If the game is lost, the pieces reset, and another game may be attempted.

After a victory, the pieces are reset and it is possible to play a friendly game within the raid. Whenever a game is going on, there is a silence debuff in the chess room to prevent clearing the trash mobs leading to Prince Malchezaar.

It is possible to reset the event by talking to the Echo of Medivh.

Unlike other bosses, there is no reputation reward.

After the event begins, raid members can control any currently uncontrolled piece of their own faction by talking to it. Upon taking control of a piece the player character is teleported onto a platform at the side of the chess field. The player gains the "control piece" buff, his viewing perspective changes to that of the controlled piece, and their action bar is replaced. It is possible to release control of a piece by removing the control buff (right-click it). This incurs a 15 sec debuff, during which time it is not possible to take control of another piece.

The action bar for controlling a chess piece has the following layout:

The abilities can either be activated by clicking on the action bar, or by using keys 1 through 4. It's faster to use the key shortcuts, particularly because the movement controls have a timeout. Each chess piece auto-attacks if it faces an enemy. While pieces can move diagonally, they can only face towards four directions. After a diagonal move, pieces turn 45° clockwise to realign themselves.

Medivh cheats at random intervals during the game. Although on paper the effects look tough, in reality they usually have little effect on the course of the event.

The king is quite strong and thus should be used in an offensive way — he is in fact similar to a DPS tank (be cautious though). A reasonable kill order is to deal with the enemy healers first, then drop the queen, and finally the king. If king and queen work together efficiently, and have good support from the bishops, the combats on the remainder of the board are less important. The friendly healers should move only very little, and concentrate on keeping the king and the queen at top health.

One simple strategy is to have each player chose one non-pawn piece which they want to control later. Then, each player moves the pawn in front of their piece as far as needed, releases control and takes over their "real" piece. As soon as holes in the pawn line appear, attack with the player controlled pieces. This is an excellent strategy for higher-levels trying to complete this event in a five-man or other smaller raid. By having a few players concentrate, at the start, on moving pawns and 'unplayed' pieces forward, these pieces are in range to auto-engage combat.

A more sophisticated strategy has four players initially controlling the four central pawns, and four other players on the king, the queen and both knights. The two remaining raid members should take the bishops. This allows to move the offensive pieces more quickly.

This event can be beaten with one person. First, move as many pawns one square ahead as possible, to give the back row of pieces room to move from the fire when the Echo of Medivh inevitably cheats. As soon as fire appears under a piece, control it and move it out of the way. Then play the queen piece and focus on damaging the opponent's king from range. Switch to a bishop to heal the king if necessary. 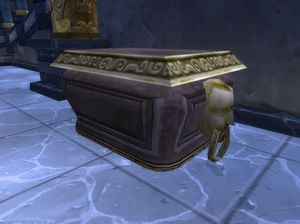 Dust Covered Chest appears after the game is won.

A macro can be used to gain a slight speed edge over using mouse clicks to gain control of / cancel control of pieces. This is especially recommended for soloing, since multiple pieces will need to be swapped between, and the player will need to react to Medivh's cheating quickly. The following macro cancels control with a modified click / keypress (i.e. with alt, control, or shift), or takes control of a piece that has been spoken to with a simple click / keypress. Players will still need to right-click on a piece they wish to control.

Alternatively, a player may split this into two macros. Since the encounter does not involve any traditional combat, players are free to swap macros into their action bar in any convenient location (although the 1-9 keys will still be replaced with the unit's control keys, so should not be used).

The "Echo of Medivh" speaks at various events during the course of the game.

Boss Slayers Instructional videos on all the KZ bosses.
Retrieved from "https://wow.gamepedia.com/index.php?title=Chess_Event&oldid=5747422"
Categories: